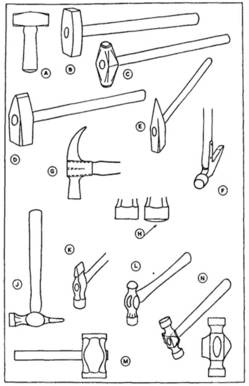 The diversity of hammers, part 1. Source of graphic: page 4 of the Basalla book quoted and cited aways down below.

(p. 21 of Bryson) Suddenly, for the first time In history, there was in most people’s lives a lot of everything. Karl Marx, living in London, noted with a tone of wonder, and just a hint of helpless admiration, that it was possible to buy five hundred kinds of hammer In Britain. Everywhere was activity, Modern Londoners live in a great Victorian city; the Victorians lived through It, so to speak. In twelve years eight railway termini opened In London. The scale of disruption–the trenches, the tunnels, the muddy excavations, the congestion of wagons and other vehicles, the smoke, the din, the clutter–that came from filling the city with railways, bridges, sewers, pumping stations, power stations, subway lines, and all the rest meant that Victorian London was not just the biggest city in the world but the noisiest, foulest, muddiest, busiest, most choked and dug-over place the world had ever seen.

The 1851 census also showed that more people in Britain now lived in cities than in the countryside–the first time that this had happened anywhere in the world–and the most visible consequence of this was crowds on a scale never before experienced. People now worked en masse, traveled en masse, were schooled, imprisoned, and hospitalized en masse. When they went out to enjoy themselves, they did that en masse, and nowhere did they go with greater enthusiasm and rapture than to the Crystal Palace.

On Marx and hammers, Bryson references p. 156 of Petroski:
Petroski, Henry. The Evolution of Useful Things: How Everyday Artifacts–from Forks and Pins to Paper Clips and Zippers–Came to Be as They Are. New York: A. Knopf, 1992.

Actually, Petroski’s source on Marx on hammers clearly is Basalla who he quotes on pp. 23-24:

(p. 23 of Petroski) George Basalla, in The Evolution of Technology, suggests the great “diversity of things made by human hands” over the past two hundred years by pointing out that five million patents have been issued in America alone. . . . (p. 24) He then introduces the fundamental questions of his study:

The variety of made things is every bit as astonishing as that of living things. Consider the range that extends from stone tools to microchips, from waterwheels to spacecraft, from thumb-tacks to skyscrapers. In 1867 Karl Marx was surprised to learn . . . that five hundred different kinds of hammers were produced in Birmingham, England, each one adapted to a specific function in industry or the crafts. What forces led to the proliferation of so many variations of this ancient and common tool? Or more generally, why are there so many different kinds of things?

Basalla dismisses the “traditional wisdom” that attributes technological diversity to necessity and utility, and looks for other explanations, “especially ones that can incorporate the most general assumptions about the meaning and goals of life.”

Petroski then again mentions Marx on hammers on the p. 156 that is referenced by Bryson:

(p. 156 of Petroski) In spite of Marx’s astonishment that five hundred different kinds of hammers were made in Birmingham in the 1860s, this was no capitalist plot. Indeed, if there were a plot, it was to not make more. The proliferation of hammer types occurred because there were then, as now, many specialized uses of hammers, and each user wished to possess a tool that was suited as ideally as possible to the tasks he performed perhaps thousands of times each day, but seldom if ever in a formal social context. I have often reflected on the value of special hammers while using the two ordinary ones from my tool chest: a familiar carpenter’s hammer with a claw, and a smaller version that fits in places the larger one does not. The tasks I’ve applied them to have included driving and removing nails, of course, but also opening and closing paint cans, pounding on chisels, tacking down carpets, straightening dented bicycle fenders, breaking bricks, driving wooden stakes, and on and on.

The Basalla book is:
Basalla, George. The Evolution of Technology, Cambridge Studies in the History of Science. Cambridge, UK: Cambridge University Press, 1988.

(p. 2 of Basalla) The variety of made things is every bit as astonishing as that of living things. Consider the range that extends from stone tools to microchips, from waterwheels to spacecraft, from thumbtacks to skyscrapers. In 1867 Karl Marx was surprised to learn, as well he might have been, that five hundred different kinds of hammers were produced in Birmingham, England, each one adapted to a specific function in industry or the crafts . . .

In Basalla’s notes to this chapter, the only Marx he mentions is the first volume of Capital. Searching volume one of Capital in Google Books for “hammer,” one discovers the relevant passage on p. 375:

(p. 374 of Marx) Manufacture is characterized by the differentiation of (p. 375) the instruments of labour–a differentiation whereby implements of a given sort acquire fixed shapes, adapted to each particular application, and by the specialisation (sic) of those instruments, giving to each special instrument its full play only in the hands of a specific detail labourer. In Birmingham alone 500 varieties of hammers are produced, and not only is each adapted to one particular process, but several varieties often serve exclusively for the different operations in one and the same process. The manufacturing period simplifies, improves, and multiplies the implements of labour, by adapting them to the exclusively special functions of each detail labourer. 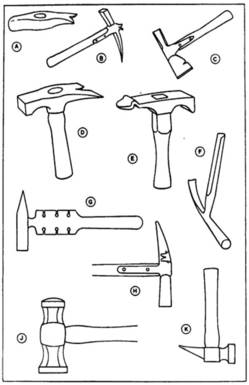 The diversity of hammers, part 2. Source of graphic: page 5 of the Basalla book quoted and cited somewhere above.