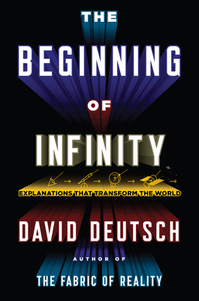 Horgan is well-known for writing a pessimistic book about the future of science. For him to write such a positive review of a book that reaches the opposite conclusion, is impressive (both about him and the book he is reviewing).
From Horgan’s review and the reviews on Amazon as of 8/7/11, I view the Deutsch book as potentially important and profound. (I will write more when I have read it.)

(p. 17) . . . Mr. Deutsch knocks my 1996 book, “The End of Science,” for proposing that the glory days of science–especially pure science, the effort to map out and understand reality–may be over. Mr. Deutsch equates my thesis with “dogmatism, stagnation and tyranny,” all of which, for the record, I oppose. But he makes the case for infinite progress with such passion, imagination and quirky brilliance that I couldn’t help enjoying his argument. More often than not I found myself agreeing with him–or at least hoping that he is right.
. . .
If we acknowledge our imperfections, Mr. Deutsch observes, then, paradoxically, there is no problem that we cannot tackle. Death, for instance. Or the apparent incompatibility between the two pillars of modern physics, quantum theory and general relativity. Or global warming, which Mr. Deutsch believes we can overcome through innovation rather than drastic cutbacks in consumption. He gores the sacred cow of “sustainability”: Societies are healthiest, he declares, not when they achieve equilibrium but when they are rapidly evolving.

For the full review, see:
JOHN HORGAN. “BOOKSHELF; To Err Is Progress; How to foster the growth of scientific knowledge: accept that it is limited no matter how definitive it may seem.” The Wall Street Journal (Weds., JULY 20, 2011): A17.
(Note: ellipses added.)