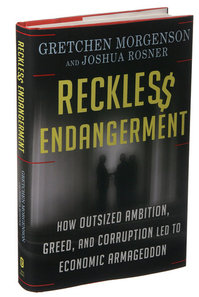 (p. C6) Although the financial crisis of 2008 has left a long trail of casualties, one group has benefited from the cataclysm: financial journalists. Several have already published books shedding light on the unprecedented events that caused investment banks to fail, global stock markets to plummet and borrowers to lose their homes. “Reckless Endangerment,” by Gretchen Morgenson, assistant business and financial editor and a columnist at The New York Times, and the financial analyst Joshua Rosner, is a worthy addition to the genre.
. . .
The book begins in 1994 with President Bill Clinton’s kicking off a public-private partnership to extend homeownership to more Americans. . . .
. . .
. . . the institution to which the authors devote the most ink is Fannie Mae, the government-supported enterprise created in 1938 to make home loans more accessible. And the person they hold most accountable is someone whose role in the “mortgage maelstrom” has until now “escaped scrutiny”: James A. Johnson, Fannie Mae’s chief executive from 1991 to 1998. Mr. Johnson was the “anonymous architect of the public-private homeownership drive that almost destroyed the economy in 2008,” the authors assert. “He was especially adept at manipulating lawmakers, eviscerating regulators and leaving taxpayers with the bill.”
The description of Mr. Johnson’s role is damning — and although the account lacks his perspective, it is thoroughly supported through scores of interviews with academics, government officials and industry executives, some of whom are granted anonymity. While Mr. Johnson didn’t respond to interview requests over five months, according to the authors, they overcome this obstacle with impressive use of public records and secondary sources, carefully attributed in the text or described in a two-page “Notes on Sources.”
. . .
A particular strength of this book is the number of doubters the authors unearthed: the unsung government analysts, public lawyers and private researchers who dared to question policy decisions and stand up to the formidable “housers,” as the true believers in government subsidies for home ownership are called.
The reader has a sickening sense of missed opportunity as these prophets are ignored or, worse, vilified, by those in a position to halt the mania. When a Congressional Budget Office researcher in 1995 reveals the multibillion-dollar extent of the government’s subsidy to Fannie Mae and its brother institution, Freddie Mac (and that one-third of these benefits never reached borrowers), he suggests that “Congress may want to revisit the special relationship.” Unable to assail the merits of his analysis, outraged Fannie Mae executives resorted to ad hominem attacks, calling budget office officials “digit-heads” and “economic pencil brains.”