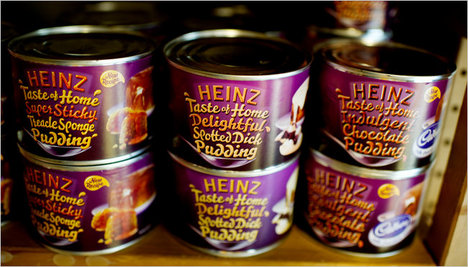 “A rule against selling food with added vitamins and minerals, like canned pudding, prompted the removal of several popular products from Abigail’s, a shop in Copenhagen.” Source of caption and photo: online version of the NYT article quoted and cited below.

(p. A6) COPENHAGEN — For the last seven years, Marianne Orum has owned a narrow store in a charming street in the heart of this Danish capital.

A sign advertises “British and South African Food and Drink.”
The shelves are lined with products familiar to most Americans, like Betty Crocker Pancake Mix, but also more exotic items, like Heinz’s Taste of Home Delightful Spotted Dick Pudding in cans, and bottles of Harviestoun Old Engine Oil porter.
But in January Ms. Orum got a phone call from government food inspectors. Tipped off by a competitor, they told her she was selling products that were fortified with vitamins or minerals, and such products require government approval, which she did not have, so she would have to take them off the shelves.
The culprits were Ovaltine; a shredded wheat cereal called Shreddies; a malt drink called Horlicks; and Marmite, the curiously popular yeast byproduct that functions in England as a sandwich spread, snack or base for a soup (just add boiling water), and is sometimes known as tar-in-the-jar.
“That’s four products in one go,” said Ms. Orum, clearly angered. “That’s a lot for a small company.”
Application for approval, she said, costs almost $1,700 per product, and time for approval can run up to six months or more; the fee is not refunded if the product is rejected.
“It’s a strange thing, this attitude in Denmark,” she said, in a tone of exasperation. “The government wants to decide what we eat and not.”