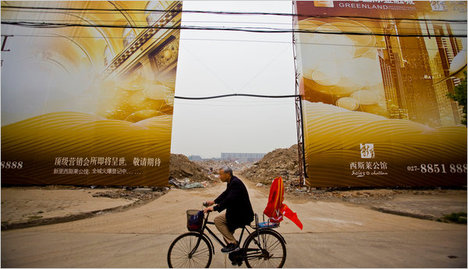 “An empty lot in Wuhan, China, where developers intend to build a tower taller than the Empire State Building in New York.” Source of caption and photo: online version of the NYT article quoted and cited below.

(p. A1) . . . the Wuhan Metro is only one piece of a $120 billion municipal master plan that includes two new airport terminals, a new financial district, a cultural district and a riverfront promenade with an office tower half again as high as the Empire State Building.
. . .
The plans for Wuhan, a provincial capital about 425 miles west of Shanghai, might seem extravagant. But they are not unusual. Dozens of other Chinese cities are racing to complete infrastructure projects just as expensive and ambitious, or more (p. A8) so, as they play their roles in this nation’s celebrated economic miracle.
In the last few years, cities’ efforts have helped government infrastructure and real estate spending surpass foreign trade as the biggest contributor to China’s growth. Subways and skyscrapers, in other words, are replacing exports of furniture and iPhones as the symbols of this nation’s prowess.
But there are growing signs that China’s long-running economic boom could be undermined by these building binges, which are financed through heavy borrowing by local governments and clever accounting that masks the true size of the debt.
The danger, experts say, is that China’s municipal governments could already be sitting on huge mountains of hidden debt — a lurking liability that threatens to stunt the nation’s economic growth for years or even decades to come. Just last week China’s national auditor, who reports to the cabinet, warned of the perils of local government borrowing. And on Tuesday the Beijing office of Moody’s Investors Service issued a report saying the national auditor might have understated Chinese banks’ actual risks from loans to local governments.
Because Chinese growth has been one of the few steady engines in the global economy in recent years, any significant slowdown in this country would have international repercussions.