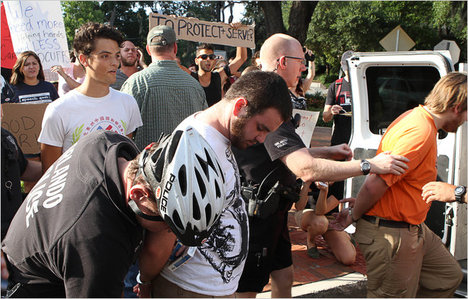 “Volunteers from Food Not Bombs were arrested at Lake Eola Park in Orlando, Fla., last month after feeding homeless people without a permit.” Source of caption and photo: online version of the NYT article quoted and cited below.

(p. A10) MIAMI — The hacker group Anonymous has declared a cyberwar against the City of Orlando, disabling Web sites for the city’s leading redevelopment organization, the local Fraternal Order of Police and the mayor’s re-election campaign.
. . .
The group described its attacks as punishment for the city’s recent practice of arresting members of Orlando Food Not Bombs, an antipoverty group that provides vegan and vegetarian meals twice a week to homeless people in one of the city’s largest parks.
“Anonymous believes that people have the right to organize, that people have the right to give to the less fortunate and that people have the right to commit acts of kindness and compassion,” the group’s members said in a news release and video posted on YouTube on Thursday. “However, it appears the police and your lawmakers of Orlando do not.”
A 2006 city ordinance requires organizations to obtain permits to feed groups of 25 people or more in downtown parks. The law was passed after numerous complaints by residents and businesses owners about the twice-weekly feedings in Lake Eola Park, city officials said. The law limits any group to no more than two permits per year per park.
Since June 1, the city police have arrested 25 Orlando Food Not Bombs volunteers without permits as they provided meals to large groups of homeless people in the park. One of those arrested last week on trespassing charges was Keith McHenry, a co-founder of the first Food Not Bombs chapter in 1980 in Cambridge, Mass. He remained in the Orange County Jail on Thursday awaiting a bond hearing. 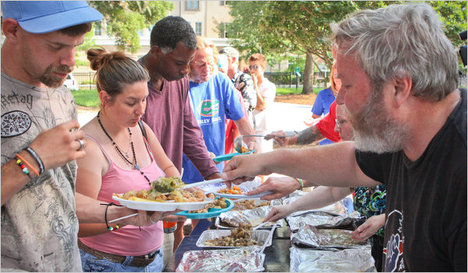 “Keith McHenry, a co-founder of the first Food Not Bombs group, serving food at the park in May. He was in jail Thursday.” Source of caption and photo: online version of the NYT article quoted and cited above.