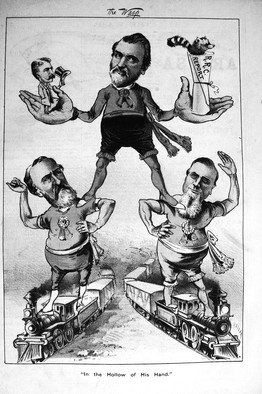 “ALL ABOARD: The Wasp magazine in 1881 lampooned railroad moguls as having regulators in the palms of their hands.” Source of caricature: online version of the WSJ article quoted and cited below.

(p. C8) Mr. Klein has written thoroughly researched and scrupulously objective biographies of the previously much maligned Jay Gould and E.H. Harriman, remaking their public images by presenting them in full. Now he has published the third and final volume of his magisterial history of the Union Pacific railroad, taking the company from 1969 to the present day.

Union Pacific–the only one of the transcontinentals to remain in business under its original name–is now a flourishing business. Thanks to a series of mergers, it is one of the largest railroads in the world, with more than 37,000 miles of track across most of the American West. Thanks to its investment in new technology, it is also among the most efficient.
In 1969, though, the future of American railroading was in doubt as the industry struggled against competition from airplanes, automobiles and trucks–all of which were in effect heavily subsidized through the government’s support for airports and the Interstate Highway System.
Another major factor in the decline of the railroads had been the stultifying hand of the Interstate Commerce Commission. The ICC had come into existence in the late 19th century to limit the often high-handed ways of the railroads as they wrestled with the difficult economics of an industry that has very high fixed costs. ( . . . .) But the ICC soon evolved into a cartel mechanism that discouraged innovation and wrapped the railroad industry in a cocoon of stultifying rules.
Mr. Klein notes that in 1975 he wrote a gloomy article about the sad state of an industry with a colorful past: “Unlike many other historical romances,” he wrote back then, “the ending did not promise to be a happy one.”
Fortunately, a deregulation movement that began under the Carter administration–yes, the Carter administration–limited the power of the ICC and then abolished it altogether. As Mr. Klein shows in the well-written “Union Pacific,” the reduction of government interference left capitalism to work its magic and produce–with the help of dedicated and skillful management–the modern, efficient and profitable railroad that is the Union Pacific.

Book reviewed in the part of the review quoted above:
Klein, Maury. Union Pacific: The Reconfiguration: America’s Greatest Railroad from 1969 to the Present. New York: Oxford University Press, USA, 2011.