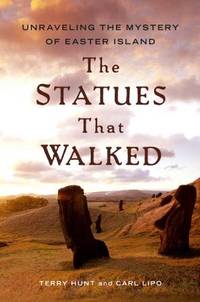 (p. C5) With the forest gone, Rapa Nui’s soil degraded; unable to feed themselves, Mr. Diamond argued in his best-selling “Collapse” (2005), Easter Islanders faced “starvation, a population crash, and a descent into cannibalism.” The fall was abrupt and overwhelming; scores of giant statues were abandoned, half-finished. Roggeveen had discovered a ruin–and a powerful eco-parable.

Books and articles by the hundred have pointed to Rapa Nui as the inevitable result of uncontrolled population growth, squandered resources and human fecklessness. “The person who felled the last tree could see it was the last tree,” wrote Paul G. Bahn and John Flenley in “Easter Island, Earth Island” (1992). “But he (or she) still felled it.” “The parallels between Easter Island and the whole modern world are chillingly obvious,” Mr. Diamond proclaimed. “The clearest example of a society that destroyed itself by overexploiting its own resources,” he said, Rapa Nui epitomizes “ecocide,” presenting a stark image of “what may lie ahead of us in our own future.”
No, it doesn’t, write archaeologists Terry Hunt and Carl Lipo in “The Statues That Walked,” a fascinating entry in the pop-science genre of Everything You Know Is Wrong. Messrs. Hunt and Lipo had no intention of challenging Mr. Diamond when they began research on Rapa Nui. But in their fourth year of field work, they obtained radiocarbon dates from Anakena Beach, thought to be the island’s oldest settlement. The dates strongly indicated that the first settlers appeared around A.D. 1200–eight centuries later than Heyerdahl and other researchers had thought.
Wait a minute, the authors in effect said. Rapa Nui is so remote that researchers believe it must have been settled by a small group of adventurers–a few dozen people, brave or crazy, in boats. The new evidence suggested that their arrival had precipitated catastrophic deforestation “on the scale of decades, not centuries.” The island then probably had only a few hundred inhabitants. Some ecologists estimate that the island originally had 16 million palm trees. How could so few people have cut down so much so fast?
. . .
The real culprit, according to “The Statues That Walked,” was the Polynesian rat (Rattus exulans), which stowed away on the boats of the first Polynesian settlers. In laboratory settings, Polynesian rat populations can double in 47 days. Throw a breeding pair into an island with no predators and abundant food and arithmetic suggests the result: ratpocalypse. If the animals multiplied as they did in Hawaii, the authors calculate, Rapa Nui would quickly have housed between two and three million. Among the favorite food sources of R. exulans are tree seeds and tree sprouts. Humans surely cleared some of the forest, but the real damage would have come from the rats that prevented new growth.
“Rather than a case of abject failure,” the authors argue, “Rapa Nui is an unlikely story of success.” The islanders had migrated, perhaps accidentally, to a place with little water and “fundamentally unproductive” soil with “uniformly low” levels of phosphorus, an essential mineral for plant growth. To avoid the wind’s dehydrating effects, the newcomers circled their gardens with stone walls known as manavai. Today, the researchers discovered, abandoned manavai occupy about 6.4 square miles, a tenth of the island’s total surface.
More impressive still, about half of the island is covered by “lithic mulching,” in which the islanders scattered broken stone over the fields. The uneven (p. C6) surface creates more turbulent airflow, reducing daytime surface temperatures and warming fields at night. And shattering the rocks exposes “fresh, unweathered surfaces, thus releasing mineral nutrients held within the rock.” Only lithic mulching produced enough nutrients–just barely–to make Rapa Nui’s terrible soil cultivable. Breaking and moving vast amounts of stone, the islanders had engineered an entirely new, more productive landscape.
Their success was short-lived. As Messrs. Hunt and Lipo point out, the 18th and 19th centuries were terrible times to reside in a small, almost defenseless Pacific nation. Rapa Nui was repeatedly ravaged by Peruvian slaving parties and nonnative diseases.
. . .
Easter Island’s people did not destroy themselves, the authors say. They were destroyed.
. . .
Oral tradition said that the statues walked into their places. Oral tradition was correct, the authors say. By shaping the huge statues just right, the islanders were able to rock them from side to side, moving them forward in a style familiar to anyone who has had to move a refrigerator. Walking the statues, the authors show in experiments, needed only 15 or 20 people.
In a 2007 article in Science, Mr. Diamond estimated that hundreds of laborers were needed to move the statues, suggesting that the eastern settlements of the island alone had to have “a population of thousands”–which in turn was proof of the island’s destructive overpopulation. By showing that the statues could have been moved by much fewer people, Messrs. Hunt and Lipo have removed one of the main supports of the ecocide theory and the parable about humankind it tells.