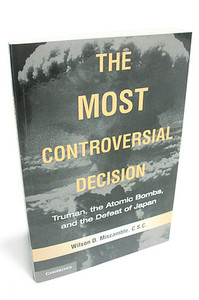 (p. A15) . . . , the author reminds us of the hundreds of thousands of Japanese who had died in the conventional bombings of places like Tokyo and Kyoto while Roosevelt was president, but with relatively little opprobrium attaching to FDR. Father Miscamble cites as well the horrific massacre of innocents for which the Japanese were responsible, a savagery still being unleashed in the summer of 1945, and the awful cost of battle in the Pacific, including 6,000 American dead and 20,000 wounded at Iwo Jima and 70,000 casualties suffered while capturing Okinawa. With these precedents, Herbert Hoover warned Truman that an invasion of the Japanese home islands could result in the loss of between half a million and a million American lives. Marshall, Leahy and Gen. Douglas MacArthur each had his own projected figures, none of them wildly different from Hoover’s.

Under these circumstances, it was inconceivable that Truman would not have ordered the use of a potentially war-winning weapon the moment it could be deployed. It is impossible to imagine the depth of the public’s fury if after the war Americans had discovered that their president, out of concern for his own conscience, had not used the weapons but instead condemned hundreds of thousands of American soldiers to certain death on the beaches and in the cities of mainland Japan.