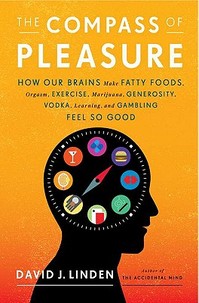 David J. Linden is the author of The Compass of Pleasure and a Johns Hopkins University School of Medicine Professor of Neuroscience.

(p. 4) . . . , the psychological profile of a compelling leader — think of tech pioneers like Jeff Bezos, Larry Ellison and Steven P. Jobs — is also that of the compulsive risk-taker, someone with a high degree of novelty-seeking behavior. In short, what we seek in leaders is often the same kind of personality type that is found in addicts, whether they are dependent on gambling, alcohol, sex or drugs.

How can this be? We typically see addicts as weak-willed losers, and chief executives and entrepreneurs are people with discipline and fortitude. To understand this apparent contradiction we need to look under the hood of the brain, and in particular at the functions that relate to pleasure and reward.
. . .
Crucially, genetic variants that suppress dopamine signaling in the pleasure circuit substantially increase pleasure- and novelty-seeking behaviors — their bearers must seek high levels of stimulation to reach the same level of pleasure that others can achieve with more moderate indulgence. Those blunted dopamine receptor variants are associated with substantially increased risk of addiction to a range of substances and behaviors.
. . .
The risk-taking, novelty-seeking and obsessive personality traits often found in addicts can be harnessed to make them very effective in the workplace. For many leaders, it’s not the case that they succeed in spite of their addiction; rather, the same brain wiring and chemistry that make them addicts also confer on them behavioral traits that serve them well.
So, when searching for your organization’s next leader, look for someone with an attenuated dopamine function: someone who is never satisfied with the status quo, someone who wants the feeling of success more than others — but likes it less.