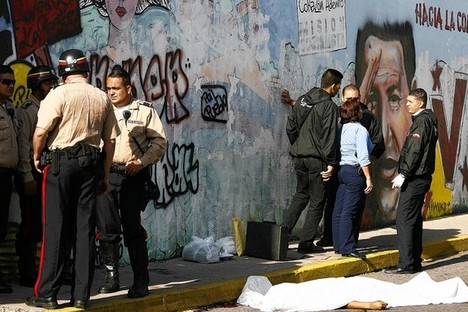 “Street crime, such as a man’s killing in Caracas last year, is high.” Note the big-brother-sized image of Chávez surveying what his socialism has wrought. Source of quoted part of caption and photo: online version of the WSJ article quoted and cited below.

Those who favor socialism should observe Venezuela carefully and ponder whether they like what they see.

(p. A13) Gerardo Urdaneta moved to Houston from Venezuela for a job in 1998, the same year Hugo Chávez was first elected president. Mr. Urdaneta, an energy-shipping specialist, planned for a temporary stop and wouldn’t even buy a house.

Thirteen years later, Mr. Chávez is still in power, Mr. Urdaneta is still here. He has been joined by thousands of other Venezuelans, and Houston shops now stock native delicacies like Pampero aged rum and guayanés cheese.
“There are Venezuelans everywhere,” Mr. Urdaneta, 50 years old, said. “Before we were passing through. That’s not the case anymore.”
Waves of white-collar Venezuelans have fled the country’s high crime rates, soaring inflation and expanding statist controls, for destinations ranging from Canada to Qatar. The top U.S. destinations are Miami, a traditional shopping mecca for Venezuelans, and Houston, which has long-standing energy ties to Venezuela, a major oil exporter.
There were some 215,000 Venezuelans in the U.S. in 2010, up from about 91,500 in 2000, according to the U.S. Census Bureau. The number of Venezuelans living in Spain has quintupled in the same period to more than 40,000, and the number of Venezuelan-born Spaniards has more than doubled to 90,000.

For the full story, see:
ÁNGEL GONZÁLEZ and EZEQUIEL MINAYA. “Venezuelan Diaspora Booms Under Chávez.” The Wall Street Journal (Mon., October 17, 2011): A13.
(Note: ellipsis added.)
(Note: the following phrase, at the end of the quoted portion above, is in the online, but not the print, version of the article: “and the number of Venezuelan-born Spaniards has more than doubled to 90,000.” 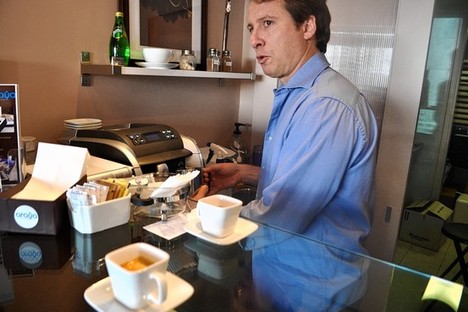 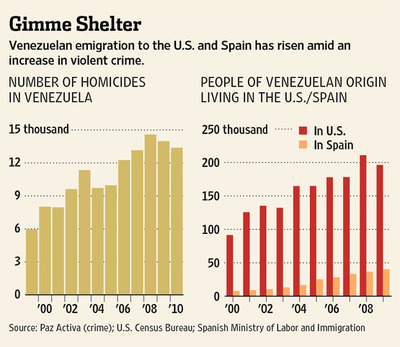