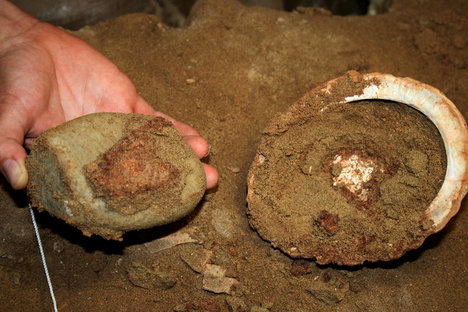 “Deposits of 100,000-year-old ocher were found in a shell alongside tools for pounding and grinding paint materials.” Source of caption and photo: online version of the NYT article quoted and cited below.

(p. A12) Digging deeper in a South African cave that had already yielded surprises from the Middle Stone Age, archaeologists have uncovered a 100,000-year-old workshop holding the tools and ingredients with which early modern humans apparently mixed some of the first known paint.

These cave artisans had stones for pounding and grinding colorful dirt enriched with a kind of iron oxide to a powder, known as ocher. This was blended with the binding fat of mammal-bone marrow and a dash of charcoal. Traces of ocher were left on the tools, and samples of the reddish compound were collected in large abalone shells, where the paint was liquefied, stirred and scooped out with a bone spatula.
Archaeologists said that in the workshop remains they were seeing the earliest example yet of how emergent Homo sapiens processed ocher, one of the species’ first pigments in wide use, its red color apparently rich in symbolic significance. The early humans may have applied the concoction to their skin for protection or simply decoration, experts suggested. Perhaps it was their way of making social and artistic statements on their bodies or their artifacts.
Of special importance to the scientists who made the discovery, the ocher workshop showed that early humans, whose anatomy was modern, had also begun thinking like us. In a report published online on Thursday in the journal Science, the researchers called this evidence of early conceptual abilities “a benchmark in the evolution of complex human cognition.”
The discovery dials back the date when the modern Homo sapiens population was known to have started using paint. Previously, no workshop older than 60,000 years had come to light, and the earliest cave and rock art began appearing about 40,000 years ago. The exuberant flowering among the Cro-Magnon artists in the caves of Europe would come even later; the parade of animals on the walls of Lascaux in France, for example, was executed 17,000 years ago.
. . .
Alison S. Brooks, an archaeologist at George Washington University who studies the Middle Stone Age in Africa but was not involved in this research, said, “This is another spectacular discovery from Blombos.”