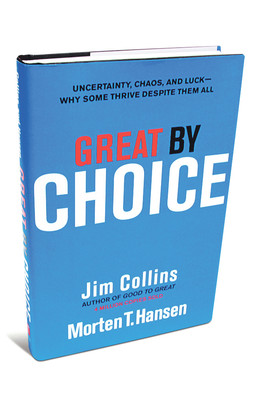 (p. A15) ‘Great by Choice” is a sequel to Jim Collins’s best-selling “Good to Great” (2001), which identified seven characteristics that enabled companies to become truly great over an extended period of time. Never mind that one of the 11 featured companies is now bankrupt (Circuit City) and another is in government receivership (Fannie Mae). Mr. Collins has a knack for analysis that business readers find compelling.

Mr. Collins’s new book tackles the question of how to steer a company to lasting success in an environment characterized by change, uncertainty and even chaos. Like his previous work, this book builds its conclusions on a framework of painstaking research, conducted over nine years and overseen by Mr. Collins and his co-author, Morten T. Hansen, a management professor at the University of California, Berkeley.
. . .
Messrs. Collins and Hansen draw some interesting and counterintuitive conclusions from their research. First, the successful leaders were not the most “visionary” or the biggest risk-takers; instead, they tended to be more empirical and disciplined, relying on evidence over gut instinct and preferring consistent gains to blow-out winners. The successful companies were not more innovative than the control companies; indeed, they were in some cases less innovative. Rather, they managed to “scale innovation”–introducing changes gradually, then moving quickly to capitalize on those that showed promise. The successful companies weren’t necessarily the most likely to adopt internal changes as a response to a changing environment. “The 10X companies changed less in reaction to their changing world than the comparison cases,” the authors conclude.
. . .
If “Great by Choice” shares the qualities that made “Good to Great” so popular, it also shares some that drew criticism. The authors’ conclusions sometimes feel like the claims of a well-written horoscope–so broadly stated that they are hard to disprove. Their 10X leaders are both “disciplined” and “creative,” “prudent” and “bold”; they go fast when they must but slow when they can; they are consistent but open to change. This encompassing approach allows the authors to fit pretty much any leader who achieves 10X performance into their analysis. Would it ever be possible, one wonders, to find a leader whose success contradicted their thesis?