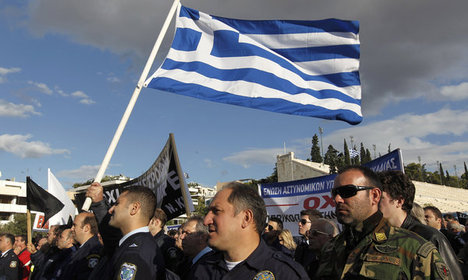 “Police officers, firefighters and coast guard officers protested austerity measures in Athens on Monday.” Source of caption and photo: online version of the NYT article quoted and cited below.

(p. A5) ATHENS — Stories of eye-popping waste and abuse of power among Greece’s bureaucrats are legion, including officials who hire their wives, and managers who submit $38,000 bills for office curtains.

The work force in Greece’s Parliament is so bloated, according to a local press investigation, that some employees do not even bother to come to work because there are not enough places for all of them to sit.
. . .
Some experts believe that Greece could reap significant savings by reducing its bureaucracy, which employs one out of five workers in the country and by some estimates could be trimmed by as much as a third without materially affecting services. But though salaries have been cut, the government has yet to lay off anyone.
The main reason is also one of the very reasons that Greece got into trouble in the first place: The government is in many ways an army of patronage appointments built up over decades. When election time rolls around, state workers become campaign workers, and their reach is enormous. There are so many of them that almost every family has one.
. . .
Whether the right workers will be laid off remains an open question. “A lot of people in the government are terrified,” Mr. Hlepas said. “They don’t think any of those people over in Parliament are going to go. They think the ones that do the work will get cut.”
Thomas Tsamatsoulis, 41, who works for the Greek equivalent of the Federal Aviation Administration, said he found himself on an early list headed for the reserve pool, though he had been sent to the United States for electronics training and now has a skill that is rare in his agency. At the same time, Mr. Tsamatsoulis said, the agency, which has just two airplanes, has more than 15 pilots.
“You want to believe the government will do this right,” he said. “But it is very difficult. It’s not how it has worked in the past. It’s all about who you know.”
Greece’s bureaucracy has been growing steadily since democracy was reinstated in 1974, with each new administration adding its supporters to the payroll — and wages rising steeply in the past decade, experts say.
“There was really a party going on,” said Yannis Stournaras, an economist and the director of the Foundation for Economic and Industrial Research in Athens. “The government kept adding bonuses and benefits and pensions. At election time there was a boom cycle as they handed out jobs.”
“Now they need to cut,” he added. “But they have already lost precious time.”
Stories of excesses abound. Mr. Papandreou told Parliament that one of his ministers found a predecessor’s $38,000 bill for curtains when the Socialists returned to power in 2009. Mr. Mossialos said he found that his own ministry, for media and communication, was spending $750,000 a year for office space for just 11 people.
But some experts question whether the culture of bloat and favoritism will ever be conquered.