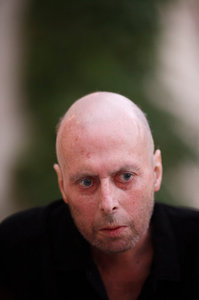 “Christopher Hitchens, after being released from the Texas hospital where he was treated for esophageal cancer.” Source of caption and photo: online version of the NYT article quoted and cited below.

A few times I have had the pleasure of seeing Christopher Hitchens interviewed. His wit is always wonderful and he skewers much that deserves skewering. I admire his perseverance at being productive, even as he battles a difficult cancer. And I admire him for sticking to his reasoned principles, even when it might be easier to accept Pascal’s Wager.
I have enjoyed the few reviews by Hitchens that I have read. I have purchased, but not yet read, two of his books—when I have read, I will write.
ADDENDUM: I wrote the above words back on November 10th, scheduled to run today. Yesterday I saw in the paper that Hitchens died on Thursday, December 15, 2011.

(p. C1) HOUSTON — Christopher Hitchens, probably the country’s most famous unbeliever, received the Freethinker of the Year Award at the annual convention of the Atheist Alliance of America here on Saturday. Mr. Hitchens was flattered by the honor, he said a few days beforehand, but also a little abashed. “I think being an atheist is something you are, not something you do,” he explained, adding: “I’m not sure we need to be honored. We don’t need positive reinforcement. On the other hand, we do need to stick up for ourselves, especially in a place like Texas, where they have laws, I think, that if you don’t believe in Jesus Christ you can’t run for sheriff.”

Mr. Hitchens, a prolific essayist and the author of “God Is Not Great: How Religion Poisons Everything,” discovered in June 2010 that he had Stage 4 esophageal cancer.
. . .
(p. C5) On balance, he reflected, the past year has been a pretty good one. He won a National Magazine Award, published “Arguably,” debated Tony Blair in front of a huge audience and added two states to the list of those he has visited. “I lack only the Dakotas and Nebraska,” he said, “though I may not get there unless someone comes up with some ethanol-based cancer treatment in Omaha.”