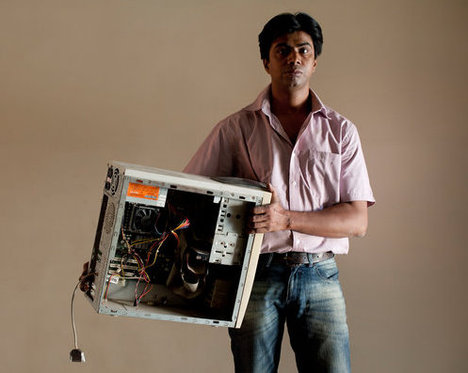 “Partho Nag, a childhood friend of Shubhrangshu Roy’s who lives in the same New Delhi suburb. Mr. Nag, who runs an IT service company out of his home, joined Mr. Roy and other friends as they volunteered at the Hazare protests. “We’ve been told since our childhoods, ‘Politics is bad, don’t get into politics,'” Mr. Nag said. “But the point is that somebody has to clean it up. We can’t just scold people.”” Source of caption and photo: online version of the NYT article quoted and cited below.

(p. 1) DWARKA, India — Shubhrangshu Barman Roy and his childhood friends are among the winners in India’s economic rise. They have earned graduate degrees, started small companies and settled into India’s expanding middle class. They sometimes take vacations together and meet for dinners or parties, maybe to celebrate a new baby or a new business deal.

Yet in August, Mr. Roy and his friends donned white Gandhi caps, boarded a Metro train in this fast-growing suburb of the Indian capital and rode into New Delhi like a band of revolutionaries to join the large anticorruption demonstrations led by the rural activist Anna Hazare. They waved Indian flags, distributed water to the crowds and vented their outrage at India’s political status quo.
“I could feel that people really wanted change,” Mr. Roy, 36, recalled proudly.
It may seem unlikely that middle-class Indians would crave change. They mostly live in rapidly growing cities and can afford cars, appliances and other conveniences that remain beyond the reach of most Indians. Theirs is the fastest growing demographic group in the country, and their buying power is expected to triple in the next 15 years, making India one of the most important consumer markets in the world.
But buying power is not political power, at least not yet in India. The wealthier India has become, the more politically disillusioned many of the beneficiaries have grown — an Indian paradox. The middle class has vast economic clout yet often remains politically marginalized in a huge democracy where the rural masses still dominate the outcome of elections and the tycoon class has the ear of politicians.
. . .
(p. 10) “This middle class is less about ‘what the state can do for me’ than ‘the state is preventing me from doing what I want to do,’ ” said Devesh Kapur, director of the Center for the Advanced Study of India at the University of Pennsylvania.
The Hazare movement rattled India’s political establishment because it offered a glimpse of what could happen if the middle class was mobilized across the country. Professionals and college students provided the organizational spine, and money, that brought hundreds of thousands of people of all backgrounds onto the streets in what many described as a political awakening.
. . .
Mr. Roy and his friends, including Mr. Nag, had grown up in New Delhi in the same government housing development. They were all the sons of government bureaucrats who would later offer similar advice: Get a government job.
“He always insisted,” Mr. Nag recalled of his father’s prodding. “But we had an idea that a government job was too lousy.”
They were teenagers in the early 1990s when Indian leaders embarked on the reforms that began dismantling the stifling licensing regulations that had choked the economy. Private enterprise, large and small, would steadily emerge as the engine of Indian growth and the delivery vehicle of growing aspirations. Mr. Nag would open a small IT service firm. Two other friends would start a textile trading company. Mr. Roy would earn graduate degrees and start a consulting firm.
. . .
On a recent afternoon, Mr. Roy pointed to a crude asphalt scar in the road where workers had installed an underground water connection. The scar extended along the road toward Mr. Roy’s house, only to abruptly turn left in the direction of another building.
“You see this?” he asked, angrily. “This is a connection that comes here, but it is illegal.”
For Mr. Roy, the scar in the street marks the corruption and collusion and the failure of the state to deliver on its end of India’s social contract. His family is supposed to get water from a legal connection for $4 a month. Except that water is unusable. For years, his father had paid a fee to fill large jugs from a private water tanker — until his father slipped while carrying one of them.
Mr. Roy then spent about $1,000 to build an underground water storage tank beside his home. Now, every week a tanker delivers a $30 shipment of water into the tank, while Mr. Roy also buys bottled water for drinking, bringing his monthly bill to about $160. Mr. Roy suspects that local officials, rather than correcting the situation, allow it to continue in exchange for kickbacks from the owners of the private water tankers. In the end, though, he pays.
These tales of petty graft proliferate across India, but especially in cities, analysts say, for the simple reason that cities now have more money.
McKinsey Global Institute, a consulting group, has estimated that India’s middle class could grow to nearly 600 million people by 2030. Today, nearly three-quarters of India’s gross domestic product comes from cities, where less than a third of India’s population lives, an imbalance that correlates with the divide between middle-class economic and political power.
“For politicians, the city has primarily become a site of extraction, and the countryside is predominantly a site of legitimacy and power,” Ashutosh Varshney, an India specialist at Brown University, wrote recently. “The countryside is where the vote is; the city is where the money is. Villages do have corruption, but the scale of corruption is vastly greater in cities.”