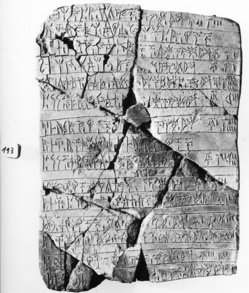 “Professor Bennett’s work opened a window to deciphering tablets written in Linear B, a Bronze Age Aegean script.” Source of caption and photo: online version of the NYT obituary quoted and cited below.

(p. 22) Deciphering an ancient script is like cracking a secret code from the past, and the unraveling of Linear B is widely considered one of the most challenging archaeological decipherments of all time, if not the most challenging.
. . .
Linear B recorded the administrative workings of Mycenaean palatial centers on Crete and the Greek mainland 3,000 years ago: accounts of crops harvested, flocks tended, goods manufactured (including furniture, chariots and perfume), preparations for religious feasts and preparations for war.
It was deciphered at last in 1952, not by a scholar but by an obsessed amateur, a young English architect named Michael Ventris. The decipherment made him world famous before his death in an automobile accident in 1956.
As Mr. Ventris had acknowledged, he was deeply guided by Professor Bennett’s work, which helped impose much-needed order on the roiling mass of strange, ancient symbols.
In his seminal monograph “The Pylos Tablets” (1951), Professor Bennett published the first definitive list of the signs of Linear B. Compiling such a list is the essential first step in deciphering any unknown script, and it is no mean feat.
. . .
“We know how much Ventris admired Bennett, because he immediately adopted Bennett’s sign list of Linear B for his own work before the decipherment,” said Mr. Robinson, whose book “The Man Who Deciphered Linear B” (2002) is a biography of Mr. Ventris. “He openly said, ‘This is a wonderful piece of work.’ ”
. . .
As meticulous as Professor Bennett’s work was, it once engendered great confusion. In 1951, after he sent Mr. Ventris a copy of his monograph, a grateful Ventris went to the post office to pick it up. As Mr. Robinson’s biography recounts, a suspicious official, eyeing the package, asked him: “I see the contents are listed as Pylos Tablets. Now, just what ailments are pylos tablets supposed to alleviate?”

The book on the amateur, uncredentialed Ventris is:
Robinson, Andrew. The Man Who Deciphered Linear B: The Story of Michael Ventris. London, UK: Thames & Hudson, 2002. 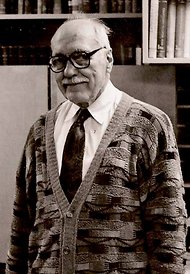 “Emmett L. Bennett Jr.” Source of caption and photo: online version of the NYT obituary quoted and cited above.