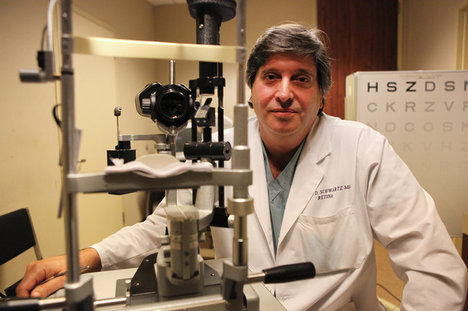 “Dr. Steven Schwartz, a retina specialist at the University of California, Los Angeles, conducted the trial with two patients.” Source of caption and photo: online version of the NYT article quoted and cited below.

(p. B7) LOS ANGELES — A treatment for eye diseases that is derived from human embryonic stem cells might have improved the vision of two patients, bolstering the beleaguered field, researchers reported Monday.
The report, published online in the medical journal The Lancet, is the first to describe the effect on patients of a therapy involving human embryonic stem cells.
. . ..
Both patients, who were legally blind, said in interviews that they had gains in eyesight that were meaningful for them. One said she could see colors better and was able to thread a needle and sew on a button for the first time in years. The other said she was able to navigate a shopping mall by herself.
. . .
. . . , researchers at Advanced Cell Technology turned embryonic stem cells into retinal pigment epithelial cells. Deterioration of these retinal cells can lead to damage to the macula, the central part of the retina, and to loss of the straight-ahead vision necessary to recognize faces, watch television or read.
Some 50,000 of the cells were implanted last July under the retinas in one eye of each woman in operations that took about 30 minutes.
One woman, Sue Freeman, who is in her 70s, suffered from the dry form of age-related macular degeneration, a leading cause of severe vision loss in the elderly. 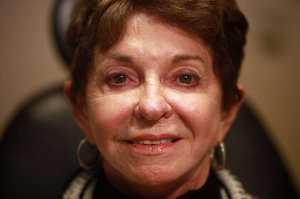 “Sue Freeman said her vision improved in a meaningful way after the treatment, which used embryonic stem cells.” Source of caption and photo: online version of the NYT article quoted and cited above.