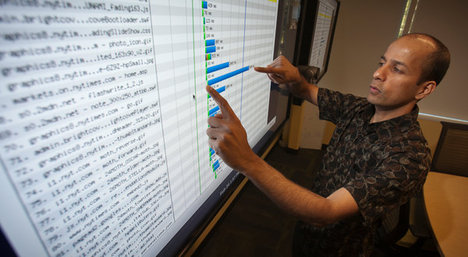 “Arvind Jain, a Google engineer, pointed out the loading speed of individual elements of a website on a test application used to check efficiency, at Google offices in Mountain View, Calif.” Source of caption and photo: online version of the NYT article quoted and cited below.

No, that’s too long.
Remember when you were willing to wait a few seconds for a computer to respond to a click on a Web site or a tap on a keyboard? These days, even 400 milliseconds — literally the blink of an eye — is too long, as Google engineers have discovered. That barely perceptible delay causes people to search less.
“Subconsciously, you don’t like to wait,” said Arvind Jain, a Google engineer who is the company’s resident speed maestro. “Every millisecond matters.”
Google and other tech companies are on a new quest for speed, challenging the likes of Mr. Jain to make fast go faster. The reason is that data-hungry smartphones and tablets are creating frustrating digital traffic jams, as people download maps, video clips of sports highlights, news updates or recommendations for nearby restaurants. The competition to be the quickest is fierce.
People will visit a Web site less often if it is slower than a close competitor by more than 250 milliseconds (a millisecond is a thousandth of a second).
“Two hundred fifty milliseconds, either slower or faster, is close to the magic number now for competitive advantage on the Web,” said Harry Shum, a computer scientist and speed specialist at Microsoft.
. . .
(p. A3) The need for speed itself seems to be accelerating. In the early 1960s, the two professors at Dartmouth College who invented the BASIC programming language, John Kemeny and Thomas Kurtz, set up a network in which many students could tap into a single, large computer from keyboard terminals.
“We found,” they observed, “that any response time that averages more than 10 seconds destroys the illusion of having one’s own computer.”
In 2009, a study by Forrester Research found that online shoppers expected pages to load in two seconds or fewer — and at three seconds, a large share abandon the site. Only three years earlier a similar Forrester study found the average expectations for page load times were four seconds or fewer.
The two-second rule is still often cited as a standard for Web commerce sites. Yet experts in human-computer interaction say that rule is outdated. “The old two-second guideline has long been surpassed on the racetrack of Web expectations,” said Eric Horvitz, a scientist at Microsoft’s research labs.