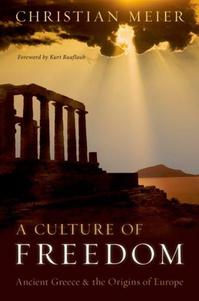 (p. C9) A city’s central space reveals much about the society that built it. In the middle of the typical Greek city-state, or polis, stood neither a palace nor a temple–the dominant centering structures of Asian and Egyptian cities–but an open public square, an agora, useful for gatherings and the conduct of business. When Cyrus the Great, founder of the Achaemenid Persian Empire, first encountered Greeks on his western boundaries, he sneered at the race of shopkeepers who hung about the agora cheating one another all day. Yet that same race would later defeat his descendants, Darius and Xerxes, in two of the most consequential battles the Western world has seen, at Marathon in 490 B.C. and at Salamis 10 years later.
. . .
Mr. Meier’s approach runs counter to a tendency in recent classical scholarship to trace Greek ideas to non-Greek sources or to seek common ground on which East and West once met. The polis itself has been claimed in the past few decades as a Near Eastern, or Phoenician, invention; Carthage too, it seems, had an agora at its hub. But Mr. Meier takes pains to dismiss this claim. Relying on expertise amassed in his long academic career, he reasserts the uniqueness of Greek political evolution, the mysterious and somewhat miraculous process that culminates, at the end of this account, in the emergence of Athenian democracy.
. . .
After surveying the crucial reforms of the Athenian leader Cleisthenes, the foundation stones of the world’s first democratic constitution, Mr. Meier asks: “Was it just a matter of time before the Attic citizenry was reorganized–so that Cleisthenes did something that would have happened sooner or later anyway? Or were Cleisthenes’ achievements beyond the scope of men less able and daring?”

The book under review is:
Meier, Christian. A Culture of Freedom: Ancient Greece and the Origins of Europe. Oxford, UK: Oxford University Press, 2011.