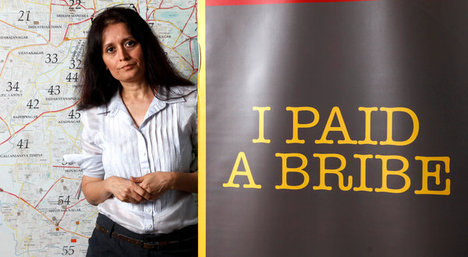 “Swati Ramanathan, a founder of the site I Paid a Bribe, in India.” Source of caption and photo: online version of the NYT article quoted and cited below.

(p. B1) The cost of claiming a legitimate income tax refund in Hyderabad, India? 10,000 rupees.

The going rate to get a child who has already passed the entrance requirements into high school in Nairobi, Kenya? 20,000 shillings.
The expense of obtaining a driver’s license after having passed the test in Karachi, Pakistan? 3,000 rupees.
Such is the price of what Swati Ramanathan calls “retail corruption,” the sort of nickel-and-dime bribery, as opposed to large-scale graft, that infects everyday life in so many parts of the world.
Ms. Ramanathan and her husband, Ramesh, along with Sridar Iyengar, set out to change all that in August 2010 when they started ipaidabribe.com, a site that collects anonymous reports of bribes paid, bribes requested but not paid and requests that were expected but not forthcoming.
About 80 percent of the more than 400,000 reports to the site tell stories like the ones above of officials and bureaucrats seeking illicit payments to provide routine services or process paperwork and forms.
“I was asked to pay a bribe to get a birth certificate for my daughter,” someone in Bangalore, India, wrote in to the Web site on Feb. 29, recording payment of a 120-rupee bribe in Bangalore. “The guy in charge called it ‘fees’ ” — except there are no fees charged for birth certificates, Ms. Ramanathan said.
Now, similar sites are spreading like kudzu around the globe, vexing petty bureaucrats the world over. Ms. Ramanathan said nongovernmental organizations and government agencies from at least 17 countries had contacted Janaagraha, the nonprofit organization in Bangalore that operates I Paid a Bribe, to ask about obtaining the source code and setting up a site of their own. 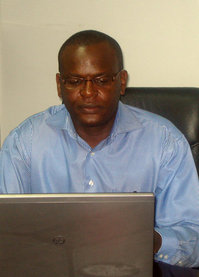 “Antony Ragui started an I Paid a Bribe site in Kenya.” Source of caption and photo: online version of the NYT article quoted and cited above.