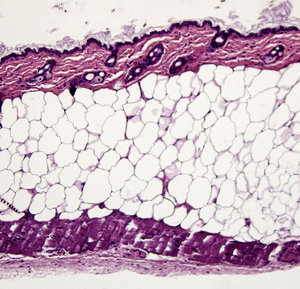 “CELL SUICIDE. A subdermal fat layer, middle, in a mouse purged of senescent cells. These mice can run much longer and have larger fat deposits.” Source of caption and photo: online version of the NYT article quoted and cited below.

(p. D3) Until recently, few people gave much thought to senescent cells. They are cells that linger in the body even after they have lost the ability to divide.

But on Nov. 2, in what could be a landmark experiment in the study of aging, researchers at the Mayo Clinic reported that if you purge the body of its senescent cells, the tissues remain youthful and vigorous.
. . .
. . . the startling result is plausible because it ties together an emerging body of knowledge about senescent cells. And it raises the possibility that attacks on the cells might postpone the diseases of aging and let people live out more of their life span in good health.
. . .
The finding was made in a strain of mice that age fast and usually die of heart arrhythmia. So despite their healthier tissues, the mice purged of senescent cells died at the usual age of heart problems. Dr. van Deursen’s team is now testing to see whether normal mice will live longer when purged of senescent cells.
The treatment was started when the normal mice were a year old, and they have now been treated for five months. Next month they will run treadmill tests to see if they are in better shape than a comparison group of untreated mice, Dr. van Deursen said.
The genetic method used to purge mice of senescent cells cannot be used in people. Instead of trying to remove senescent cells from elderly people, Dr. Peeper believes, it may be more effective to identify which of the factors that the senescent cells secrete are the source of their ill effects and to develop drugs that block these factors.
But Dr. van Deursen thinks it would be better to go after the senescent cells themselves. In his view it should be easy enough by trial and error to find chemicals that selectively destroy senescent cells, just like the targeted chemicals now used to treat certain kinds of cancer. And unlike the cancer cells, which proliferate so fast that they soon develop resistance, the senescent cells cannot replicate, so they should be easy targets.
Several companies and individuals have already approached the Mayo Clinic to explore developing such drugs. “They think it’s possible, and they are very enthusiastic,” Dr. van Deursen said. “So I can guarantee that there will be initiatives to find drugs that kill senescent cells and mimic the system that we have developed in the mouse.”
. . .
“If you remove the senescent cells you improve things considerably, but you can’t reverse the process or completely stop the aging because it has other causes,” Dr. van Deursen said. “Personally I think we can slow aging down, and over time we will become more and more successful.