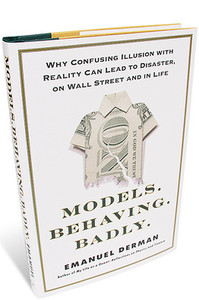 (p. A19) Trained as a physicist, Emanuel Derman once served as the head of quantitative analysis at Goldman Sachs and is currently a professor of industrial engineering and operations research at Columbia University. With “Models Behaving Badly” he offers a readable, even eloquent combination of personal history, philosophical musing and honest confession concerning the dangers of relying on numerical models not only on Wall Street but also in life.

Mr. Derman’s particular thesis can be stated simply: Although financial models employ the mathematics and style of physics, they are fundamentally different from the models that science produces. Physical models can provide an accurate description of reality. Financial models, despite their mathematical sophistication, can at best provide a vast oversimplification of reality. In the universe of finance, the behavior of individuals determines value–and, as he says, “people change their minds.”
In short, beware of physics envy. When we make models involving human beings, Mr. Derman notes, “we are trying to force the ugly stepsister’s foot into Cinderella’s pretty glass slipper. It doesn’t fit without cutting off some of the essential parts.” As the collapse of the subprime collateralized debt market in 2008 made clear, it is a terrible mistake to put too much faith in models purporting to value financial instruments. “In crises,” Mr. Derman writes, “the behavior of people changes and normal models fail. While quantum electrodynamics is a genuine theory of all reality, financial models are only mediocre metaphors for a part of it.”

The book under review is:
Derman, Emanuel. Models.Behaving.Badly: Why Confusing Illusion with Reality Can Lead to Disaster, on Wall Street and in Life. New York: Free Press, 2011.

One thought on “Physicist Says “Financial Models Are Only Mediocre Metaphors””