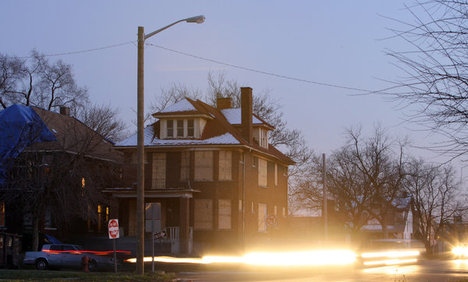 “”I don’t go out to get gas at night. I don’t run to any stores. I try to do everything in the daytime and to be back before night falls,” said Juanita Kennedy, a resident of Highland Park, Mich.” Source of caption and photo: online version of the NYT article quoted and cited below.

(p. A11) HIGHLAND PARK, Mich. — When the sun sets in this small city, its neighborhoods seem to vanish.

In a deal to save money, two-thirds of the streetlights were yanked from the ground and hauled away this year, and the resulting darkness is a look that is familiar in the wide open cornfields of Iowa but not here, in a struggling community surrounded on nearly all sides by Detroit.
Parents say they now worry more about allowing their children to walk to school early in the morning. Motorists complain that they often cannot see pedestrians until headlights — and cars — are right upon them. Some residents say they are reshaping their lives to fit the hours of daylight, as the members of the Rev. D. Alexander Bullock’s church did recently when they urged him to move up Saturday Bible study to 4 p.m. from the usual 7 p.m.
“It’s just too dark,” said Mr. Bullock, of Greater St. Matthew Baptist Church. “I come out of the church, and I can’t see what’s in front of me. What happened to our streetlights is what happens when politicians lose hope. All kinds of crazy decisions get made, and citizens lose faith in the process.”
. . .
(p. A16) “The people were basically left in the dark,” said DeAndre Windom, who was elected mayor in November. He said the disappearing streetlights were the top concern of residents as he campaigned door to door.
“When you come through at night, it’s scary; you have to wonder if anyone is lurking around waiting to catch you off your guard,” said Juanita Kennedy, 65, who said she had installed a home security system and undergone training to carry a handgun in the weeks since workmen carried away the streetlight in front of her house. “I don’t go out to get gas at night. I don’t run to any stores. I try to do everything in the daytime and to be back before night falls.”