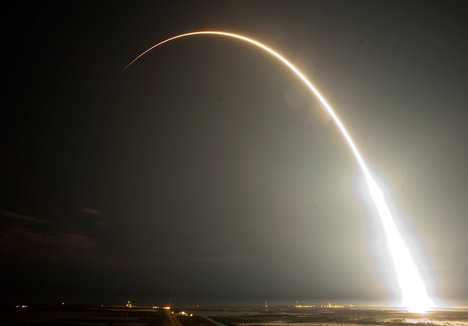 ‘The Falcon 9 rocket seen in a time-exposure photograph during liftoff.” Source of caption and photo: online version of the NYT article quoted and cited below.

(p. A13) CAPE CANAVERAL, Fla. — He does not have the name recognition of some other space entrepreneurs, people like Richard Branson, the founder of the Virgin empire, or Paul Allen of Microsoft fame, or Jeff Bezos, the Amazon.com billionaire.

That will probably change if things keep going his way. Elon Musk, a computer prodigy and serial entrepreneur whose ambitions include solving the world’s energy needs and colonizing the solar system, was the man of the hour — or of 3:44 a.m. Tuesday, Eastern time — when the rocket ship built by his company, SpaceX, lifted off gracefully in a nighttime launching and arced off in a streak of light amid loud applause.
. . .
If all goes as planned, his unmanned Dragon capsule, lifted into orbit by his Falcon 9 rocket, will berth at the International Space Station on Friday bearing a modest cargo: 162 meal packets (45 of them low-sodium), a laptop computer, a change of clothes for the station astronauts and 15 student experiments.
Far more important than the supplies is the proof of concept. Mr. Musk is trying to show the world that a determined entrepreneur can start a rocket company from scratch and, a decade later, end up doing a job that has until now been the exclusive province of federal governments.
. . .
Just four years ago, SpaceX went through a near-death experience. The first three launchings of the company’s small Falcon 1 rocket failed. One more failure, Mr. Musk said, and he would have run out of money. As he went through a divorce from his first wife, with whom he has five sons, he had to borrow money from friends.
The fourth launching succeeded. Late in 2008, NASA awarded SpaceX the cargo contract. The first two Falcon 9 launchings, in 2010, also succeeded.
Early Tuesday morning, the success streak continued. As the countdown clock hit zero, the engines remained ignited. Less than 10 minutes later, the Dragon was in orbit. It then aced several other early tasks like the deployment of solar arrays and navigational sensors and the testing of GPS equipment.
“Anything could have gone wrong,” Mr. Musk said. “And everything went right, fortunately.” 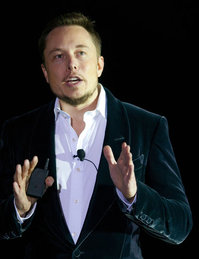 “Elon Musk.” Source of caption and photo: online version of the NYT article quoted and cited above.