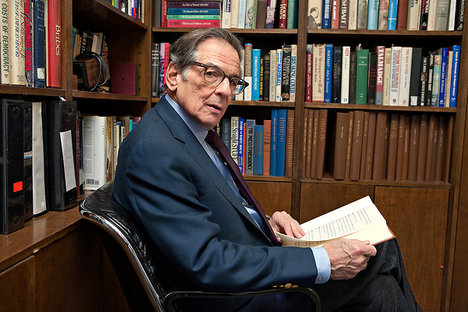 “Robert Caro in his Manhattan office. The later volumes of his L.B.J. biography have taken more years to write than it took the former president to live them.” Source of caption and photo: online version of the NYT article quoted and cited below.

(p. 37) “There was never a plan,” Caro said to me, explaining how he had become a historian and biographer. “There was just a series of mistakes.”
. . .
(p. 38) Caro had a[n] . . . epiphany about power in the early ’60s. He had moved on to Newsday by then, where he discovered that he had a knack for investigative reporting, and was assigned to look into a plan by Robert Moses to build a bridge from Rye, N.Y., across Long Island Sound to Oyster Bay. “This was the world’s worst idea,” he told me. “The piers would have had to be so big that they’d disrupt the tides.” Caro wrote a series exposing the folly of this scheme, and it seemed to have persuaded just about everyone, including the governor, Nelson Rockefeller. But then, he recalled, he got a call from a friend in Albany saying, “Bob, I think you need to come up here.” Caro said: “I got there in time for a vote in the Assembly authorizing some preliminary step toward the bridge, and it passed by something like 138-4. That was one of the transformational moments of my life. I got in the car and drove home to Long Island, and I kept thinking to myself: ‘Everything you’ve been doing is baloney. You’ve been writing under the belief that power in a democracy comes from the ballot box. But here’s a guy who has never been elected to anything, who has enough power to turn the entire state around, and you don’t have the slightest idea how he got it.’ ”
The lesson was repeated in 1965, when Caro had a Nieman fellowship at Harvard and took a class in land use and urban planning. “They were talking one day about highways and where they got built,” he recalled, “and here were these mathematical formulas about traffic density and population density and so on, and all of a sudden I said to myself: ‘This is completely wrong. This isn’t why highways get built. Highways get built because Robert Moses wants them built there. If you don’t find out and explain to people where Robert Moses gets his power, then everything else you do is going to be dishonest.’ “

Caro’s book on Robert Moses is:
Caro, Robert A. The Power Broker: Robert Moses and the Fall of New York. New York: Alfred A. Knopf, Inc., 1974.