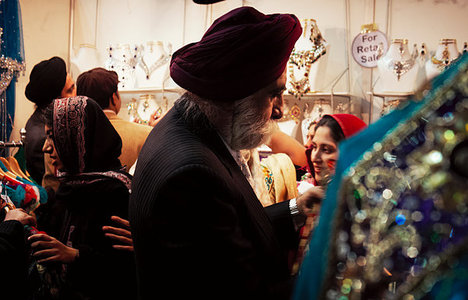 “A booth for Motherson International, an Indian company that produces clothes and costume jewelry, at the Indian trade show in Lahore, Pakistan, in February.” Source of caption and photo: online version of the NYT article quoted and cited below.

(p. 6) LAHORE, Pakistan — On the day the Indian trade delegation came across the border, Pakistan was having another political crisis. The prime minister was embroiled in a showdown with the country’s Supreme Court. Early elections were rumored. And Islamists had just staged a rally in Karachi to protest “foreign intervention” on Pakistani soil.

Not, perhaps, the perfect moment to hammer out closer trade ties.
Yet Rajiv Kumar, a leader of the Indian delegation, was pleased. It was mid-February, and his business group was staging the first Indian trade show ever held in Pakistan. Tens of thousands of visitors would attend during three days. And Indian and Pakistani business leaders, as well as both countries’ commerce ministers, swapped cards, sipped tea and feasted at lavish banquets.
“Look at this!” Mr. Kumar exclaimed as his car rolled up to the convention center here in Lahore, where crowds were thronging for the trade show. “My God! Quite good, I’d say.”
. . .
(p. 12) Ashok Malik, a journalist who was one of the writers of an academic analysis of India’s private sector diplomacy, said the influence of Indian business is evident beyond the changed relationship with the United States.
. . .
Mr. Malik noted that the rise of India’s middle class, as well as the growing domestic influence of the private sector, has created a quiet constituency for easing hostilities with Pakistan. “The growth phenomenon has made the Indian middle class less tolerant of adventurism, lawlessness and war,” he said. “It is still worried about terrorism. But it doesn’t want to fight wars. It has other things to do.”

For the full story, see:
JIM YARDLEY. “INDIA’S WAY; Propelling a Nation Onto the World Stage; Industry Opens Doors to India’s Neighbors and Rivals, Including Pakistan.” The New York Times, First Section (Sun., April 1, 2012): 6 & 12.
(Note: ellipses added.)
(Note: the online version of the story is dated March 31, 2012 and has the title “INDIA’S WAY; Industry in India Helps Open a Door to the World.”) 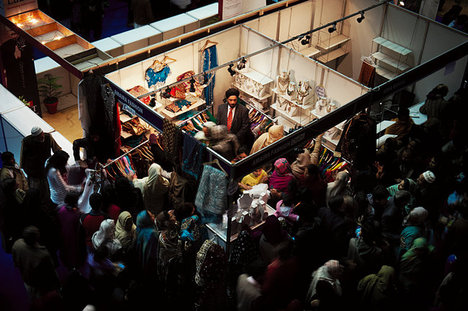 “India held its first trade show in Pakistan in Lahore.” Source of caption and photo: online version of the NYT article quoted and cited above.

One thought on “Middle Class “Doesn’t Want to Fight Wars. It Has Other Things to Do.””