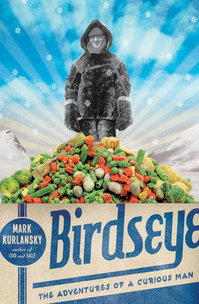 (p. C7) Birdseye made and lost money, went west to search for the cause of Rocky Mountain spotted fever and hunted fox for furs in Labrador, where he took his wife and infant son to live 250 miles by dogsled from the nearest hospital. He harpooned whales near his home in Gloucester, Mass., and wore a necktie while doing it. And he designed the industrial processes that made it possible to fast-freeze food, thus rendering obsolete much canned, dried, salted and smoked food and the musty basement bins that once held a winter’s diet of turnips, onions and potatoes.

Food had been frozen earlier but more slowly. Crystallization turned it mushy and tasteless. It was poor man’s food. In Labrador, fishing with the Inuit, Birdseye noticed that when a fish was pulled from a hole in the ice and into minus-40-degree air, it froze instantly, staying so fresh that when it was thawed months later, it would sometimes come alive.
He spent years putting together modern mass production with what he had seen in Labrador. By the 1920s, he was fast-freezing food that was far closer to fresh than any competition. “Today’s locavore movement–the movement to shun food from afar and eat what is produced locally . . . would have perplexed him,” Mr. Kurlansky writes. After all, “consumers could go to a supermarket and buy the food of California, France and China for less money.”
. . .
The author makes a telling point about locavores: “We need to grasp that people who are accustomed only to artisanal goods long for the industrial. It is only when the usual product is industrial that the artisanal is longed for. This is why artisanal food, the dream of the food of family farms, caught on so powerfully in California, one of the early strongholds of agribusiness with little tradition of small family farms.”
Birdseye’s heroism has been forgotten, and his frozen food is taken for granted, the way all inventions are taken sooner or later. He sold his business for $23.5 million in 1929 to what would become General Foods. He stayed on as a consultant and also ran his light bulb company, which he would sell too.

For the full review, see:
HENRY ALLEN. “The American Way of Eating; Harlan Sanders and Clarence Birdseye, just like today’s locavores, saw a meal as a way to improve people’s lives.” The Wall Street Journal (Sat., May 5, 2012): C5 & C7.
(Note: ellipsis added.)
(Note: the online version of the review is dated May 4, 2012.)

(p. C6) “Birdseye” is a slight but intriguing book that raises far more questions than it answers. But it indeed coaxes readers to re-examine everyday miracles like frozen food, and to imagine where places with no indigenous produce would be without them. It emphasizes the many steps that went into developing such a simple-seeming process. 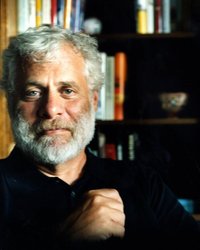 “Mark Kurlansky.” Source of caption and photo: online version of the NYT article quoted and cited above.