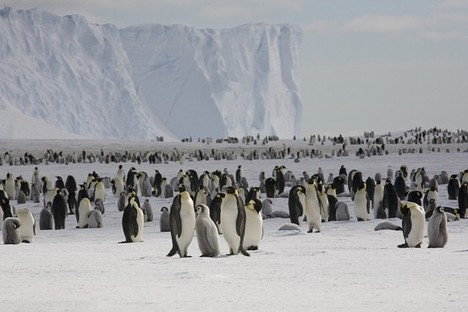 “Using satellites, researchers counted Antarctica’s emperor penguins at 46 colonies like this one near the Halley Research Station, finding numbers twice as high as previously thought.” Source of caption and photo: online version of the WSJ article quoted and cited below.

(p. 2) Antarctica has twice as many emperor penguins as scientists had thought, according to a new study using satellite imagery in the first comprehensive survey of one of the world’s most iconic birds.
British and U.S. geospatial mapping experts reported Friday in the journal PLoS One that they had counted 595,000 emperor penguins living in 46 colonies along the coast of Antarctica, compared with previous estimates of 270,000 to 350,000 penguins based on surveys of just five colonies. The researchers also discovered four previously unknown emperor-penguin colonies and confirmed the location of three others.
“It is good news from a conservation point of view,” said geographer Peter Fretwell at the British Antarctic Survey in Cambridge, England, who led the penguin satellite census. “This is the first comprehensive census of a species taken from space.”
Although all of Antarctica’s wildlife is protected by international treaty, the emperor penguins are not an officially endangered species. But they are considered a bellwether of any future climate changes in Antarctica because their icy habitat is so sensitive to rising temperatures.

(p. A2) In essence, Justice says that, beginning in 2008, several plankton, in the form of five publishers, conspired against a whale, Amazon, whose monopoly clout had imposed a $9.99 retail price for e-books.
The deal the publishers eventually reached with Apple unfixed the price of e-books by linking their prices to the cover price of the print version. More importantly, publishers could begin to reclaim the right to set e-book retail prices generally.
. . .
Apple, with 15% of the e-book market, is no monopolist. The five publishers, though Justice insists they dominate trade publishing, account for only about half of e-book sales. Crucially for antitrust, the barriers to entry are zilch: Amazon, with 60% market share, could create its own e-book imprint tomorrow and begin bidding for the most popular authors.
. . .
Let’s go back to “per se” vs. “rule of reason.” Because the 1890 Sherman Act is so sweeping and almost any business arrangement could be read as prohibited, courts understandably evolved a “rule of reason” to distinguish the permissible from the impermissible. Unfortunately, the result has been antitrust as we know it: wild and fluctuating discretion masquerading as law. Retail price maintenance alone has been embraced and dumped so many times by the courts that it must feel like Jennifer Aniston.
“Do no harm” would be a better principle for trustbusters.

For the full commentary, see:
HOLMAN W. JENKINS, JR. “BUSINESS WORLD; Washington vs. Books; What about piracy, low barriers to entry and the fact that literature isn’t chopped liver?” The Wall Street Journal (Sat., April 14, 2012): A15.
(Note: the online version of the commentary is dated April 13, 2012.) 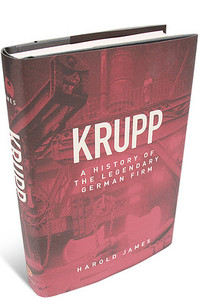 (p. A13) Harold James, professor of history and international affairs at Princeton University, portrays a vastly different organization in “Krupp,” a painstaking chronicle of a company that traces its roots to a steel foundry in Essen in 1810. Mr. James’s Krupp is a company for which the manufacturing of war matériel was always of secondary interest to that of civilian production. The company might have preferred to concentrate on manufacturing railroad equipment and consumer goods, but in the developing and expansionist German empire of the 19th century, state requirements for the tools of power dovetailed with Krupp’s desire for regular long-term contracts. The result for Krupp was a practical, if not deliberate, focus on armaments.

From the manufacturer’s perspective, the emphasis on war matériel did not consign Krupp to the ranks of belligerent militarists; it was just smart business. “The purpose of work should be the common good,” founder Alfred Krupp once said, or at least that quote graces a statue the company erected after his death in 1887. All through the 19th century, Mr. James says, the pursuit of profit was less central to the Krupp mission than building a solid enterprise within a framework of social responsibility. As early as 1836, Krupp established a voluntary health-insurance program for its workers. By the middle of the century, life-insurance and pension plans had been instituted. Workers’ hostels and company hospitals were constructed. In exchange for this paternalistic benevolence, Krupp expected complete loyalty from its work force and vehemently opposed the slightest hint of union organization or political activity among its employees.
“Alfred Krupp perfectly fits the mold of the heroic entrepreneur,” Mr. James writes. “Profoundly skeptical of joint-stock companies, banks, and capitalism in general, but also of big-scale science and modern research methods, he was a genius at extending to its utmost limits the possibilities of the craft entrepreneur.”

For the full review, see:
JENNIFER SIEGEL. “BOOKSHELF; Heavy Industry, Burdened Past; The company’s 19th-century founder said it was devoted to the “common good.” In World War II, it worked hard for the Third Reich.” The Wall Street Journal (Tues., April 17, 2012): A13.
(Note: the online version of the interview is dated April 16, 2012.)

(p. 42) Today, everybody knows something about Texas, but in those days Texas was still like an undiscovered oasis of freethinking, individualistic, action-oriented, business-minded people. It was a place where gut American characteristics were concentrated and magnified. A place where you could taste the frontier spirit that is part of our national heritage. There was a feeling in the air that you could invent yourself as any character you chose, and that your neighbors would leave you alone to be whoever you wanted to be. I liked the aggressiveness of the people in pursuing their goals, and the fact that you could be poco loco, as Spanish speakers say: a little crazy. This quality is a big help when you’re an entrepreneur. I felt that, in Dallas. there was extra oxygen in the air. 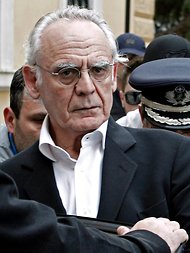 “Akis Tsochatzopoulos on April 11 became the highest-ranking Greek official ever to be detained on corruption charges.” Source of caption and photo: online version of the NYT article quoted and cited below.

(p. A6) Prosecutors accuse the former defense minister, Akis Tsochatzopoulos, 73, a founding member of the Socialist Party and the highest-ranking Greek official ever to be detained on corruption charges, of pocketing at least $26 million in kickbacks for Greece’s purchase of submarines and missile systems and funneling the money through offshore accounts to buy property.
. . .
The case of Mr. Tsochatzopoulos (pronounced zok-at-ZOP-ou-los) marks the rise — and perhaps fall — of a political culture that has dominated Greece for decades, in which alternating Socialist and center-right New Democracy governments helped spread the spoils and, critics say, the corruption, during the boom years. That system helped drive up Greece’s public debt to the point that it was forced to seek a foreign bailout in 2010.
As the money has run out, an entrenched favors-for-votes culture is now coming unglued, and Greeks have become less forgiving of high-level missteps.

The author of the following commentary is a Princeton physics professor:

(p. A13) What is happening to global temperatures in reality? The answer is: almost nothing for more than 10 years. Monthly values of the global temperature anomaly of the lower atmosphere, compiled at the University of Alabama from NASA satellite data, can be found at the website http://www.drroyspencer.com/latest-global-temperatures/. The latest (February 2012) monthly global temperature anomaly for the lower atmosphere was minus 0.12 degrees Celsius, slightly less than the average since the satellite record of temperatures began in 1979.
The lack of any statistically significant warming for over a decade has made it more difficult for the United Nations Intergovernmental Panel on Climate Change (IPCC) and its supporters to demonize the atmospheric gas CO2 which is released when fossil fuels are burned.
. . .
Frustrated by the lack of computer-predicted warming over the past decade, some IPCC supporters have been claiming that “extreme weather” has become more common because of more CO2. But there is no hard evidence this is true.
. . .
Large fluctuations from warm to cold winters have been the rule for the U.S., as one can see from records kept by the National Ocean and Atmospheric Administration, NOAA. For example, the winters of 1932 and 1934 were as warm as or warmer than the 2011-2012 one and the winter of 1936 was much colder.
. . .
It is easy to be confused about climate, because we are constantly being warned about the horrible things that will happen or are already happening as a result of mankind’s use of fossil fuels. But these ominous predictions are based on computer models. It is important to distinguish between what the climate is actually doing and what computer models predict. The observed response of the climate to more CO2 is not in good agreement with model predictions.
. . .
. . . we should . . . remember the description of how science works by the late, great physicist, Richard Feynman:
“In general we look for a new law by the following process. First we guess it. Then we compute the consequences of the guess to see what would be implied if this law that we guessed is right. Then we compare the result of the computation to nature, with experiment or experience; compare it directly with observation, to see if it works. If it disagrees with experiment it is wrong.”

For the full commentary, see:
WILLIAM HAPPER. “Global Warming Models Are Wrong Again; The observed response of the climate to more CO2 is not in good agreement with predictions.” The Wall Street Journal (Tues., March 27, 2012): A13.
(Note: ellipses added.) 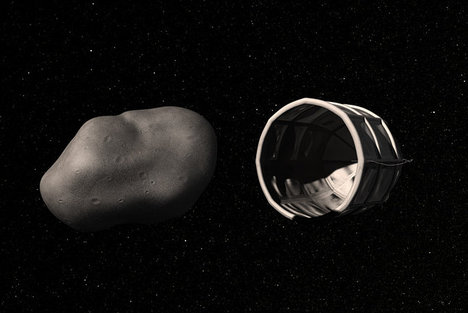 (p. B3) SEATTLE–A start-up with high-profile backers on Tuesday unveiled its plan to send robotic spacecraft to remotely mine asteroids, a highly ambitious effort aimed at opening up a new frontier in space exploration.

At an event at the Seattle Museum of Flight, a group that included former National Aeronautics and Space Administration officials unveiled Planetary Resources Inc. and said it is developing a “low-cost” series of spacecraft to prospect and mine “near-Earth” asteroids for water and metals, and thus bring “the natural resources of space within humanity’s economic sphere of influence.”
The solar system is “full of resources, and we can bring that back to humanity,” said Planetary Resources co-founder Peter Diamandis, who helped start the X-Prize competition to spur nongovernmental space flight.
The company said it expects to launch its first spacecraft to low-Earth orbit–between 100 and 1,000 miles above the Earth’s surface–within two years, in what would be a prelude to sending spacecraft to prospect and mine asteroids.
The company, which was founded three years ago but remained secret until last week, said it could take a decade to finish prospecting, or identifying the best candidates for mining.