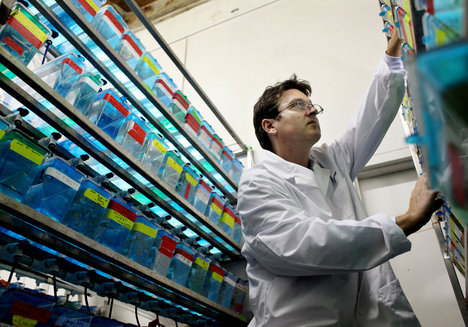 “Xavier Lauth, a scientist, working with zebra fish in a lab at the Center for Aquaculture Technologies.” Source of caption and photo: online version of the NYT article quoted and cited below.

(p. B1) SAN DIEGO — If Americans ever eat genetically engineered fast-growing salmon, it might be because of a Soviet biologist turned oligarch turned government minister turned fish farming entrepreneur.

That man, Kakha Bendukidze, holds the key to either extinction or survival for AquaBounty Technologies, the American company that is hoping for federal approval of a type of salmon that would be the first genetically engineered animal in the human food supply.
But 20 months since the Food and Drug Administration tentatively concluded that the fish would be safe to eat and for the environment, there has been no approval. And AquaBounty is running out of money.
Mr. Bendukidze, the former economics minister of Georgia and AquaBounty’s largest shareholder, says the company can stay afloat a while longer. But he is skeptical that genetically altered salmon will be approved in the United States in an election year, given the resistance from environmental and consumer groups.
“I understand politically that it’s easier not to approve than to approve,” Mr. Bendukidze said during a recent visit to a newly acquired laboratory in San Diego, where jars of tiny zebra fish for use in genetic engineering experiments are stacked on shelves. While many people would be annoyed by the approval, he said, “There will be no one except some scientists who will be annoyed if it is not approved.”
. . .
(p. B6) Mr. Bendukidze, 56, began his career as a molecular biologist in a research institute outside Moscow, working on genetically engineering viruses for vaccine use. He later started a company selling biology supplies. When parts of the Soviet economy were privatized, he earned a reputation as a corporate raider, building through acquisitions and leading United Heavy Machinery, a large maker of equipment for mining, oil drilling and power generation.
In 2004, Mr. Bendukidze returned to his native Georgia as economics minister under Mikheil Saakashvili, the newly elected president. With a free-market philosophy and a penchant for insulting those who disagreed with him, Mr. Bendukidze earned his share of enemies as he moved to deregulate and privatize the economy.
He still lives in Georgia and now spends his time as chairman of the Free University of Tbilisi, which he founded. He also set up Linnaeus Capital Partners to manage his money. It has increasingly focused on aquaculture, with stakes in companies in Greece, Israel and Britain, in addition to AquaBounty. 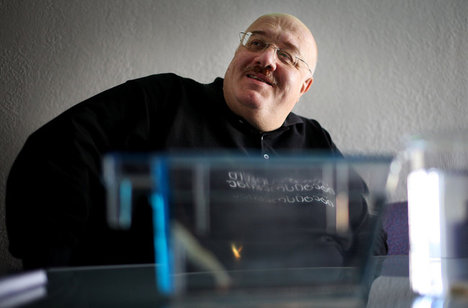 “Kakha Bendukidze acquired the lab after agreeing to give AquaBounty more cash.” Source of caption and photo: online version of the NYT article quoted and cited above.