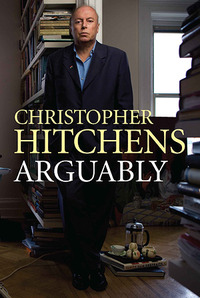 (p. 8) Anyone who occasionally opens one of our more serious periodicals has learned that the byline of Christopher Hitchens is an opportunity to be delighted or maddened — possibly both — but in any case not to be missed. He is our intellectual omnivore, exhilarating and infuriating, if not in equal parts at least with equal wit. He has been rather famously an aggressive critic of God and his followers, after cutting his sacrilegious teeth on Mother Teresa. He wrote a deadpan argument for trying Henry Kissinger as a war criminal, then was branded an apostate by former friends on the left for vigorously supporting the wars in Afghanistan and Iraq. (He memorably — a lot of what Hitchens has written merits the adverb — shot back that his antiwar critics were “the sort who, discovering a viper in the bed of their child, would place the first call to People for the Ethical Treatment of Animals.”) And he is dying of esophageal cancer, a fact he has faced with exceptional aplomb.

This fifth and, one fears, possibly last collection of his essays is a reminder of all that will be missed when the cancer is finished with him.
. . .
(p. 9) At times the book feels like an ongoing argument with the leftist intellectuals on the other side of the Atlantic, who tend to view America as lacking in history, culture or moral standing.
In an essay on the journalism of Karl Marx, written for the left-leaning Guardian, he puts an elbow in the ribs of his old socialist friends: “If you are looking for an irony of history, you will find it . . . in the fact that he and Engels considered Russia the great bastion of reaction and America the great potential nurse of liberty and equality. This is not the sort of thing they teach you in school (in either country).”
“There is currently much easy talk about the ‘decline’ of my adopted country, both in confidence and in resources,” he writes in his introduction. “I don’t choose to join this denigration.”
Christopher Hitchens: American patriot. We’ve done a lot worse.
If there is a God, and he lacks a sense of irony, he will send Hitchens to the hottest precinct of hell. If God does have a sense of irony, Hitchens will spend eternity in a town that serves no liquor and has no library. Either way, heaven will be a less interesting place.

For the full review, see:
BILL KELLER. “Christopher Hitchens, a Man of His Words.” The New York Times Book Review (Sun., September 11, 2011): 8-9.
(Note: ellipsis between paragraphs was added; ellipsis internal to a Hitchens quote was in the original.)
(Note: the online version of the article is dated September 9, 2011.) 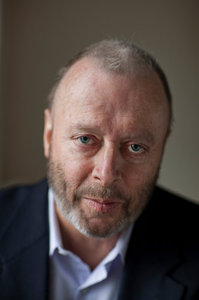 “Christopher Hitchens.” Source of caption and photo: online version of the NYT article quoted and cited above.