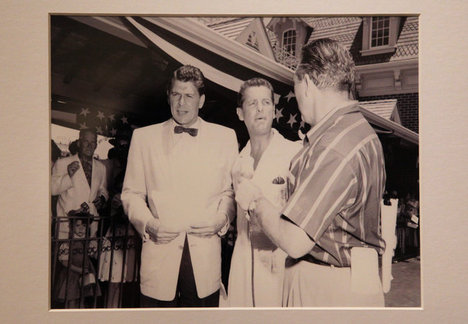 “Ronald Reagan, left, helped host a TV show about Disneyland’s opening in 1955.” Source of caption and photo: online version of the NYT article quoted and cited below.

(p. 11) In an unusual collaboration of presidential scholarship and mass-market entertainment — featuring two men who, truth be told, were never particularly close — the Ronald Reagan Presidential Foundation and the Walt Disney Company have joined together to open a sprawling, nine-month exhibition drawn from the Disney archives.
. . .
Reagan was one of three M.C.’s for the televised opening of Disneyland in 1955; a grainy video in the exhibit captures the event. As governor, Reagan petitioned the United States postmaster to issue a Walt Disney stamp, and he was on hand in 1990 for Disneyland’s 35th anniversary.
“He and Walt Disney did know each other,” said Robert A. Iger, the chief ex-(p. 16)ecutive and chairman of the Walt Disney Company. “They became Californians. And they clearly had mutual respect for one another.”