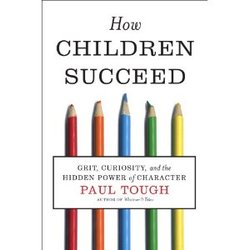 (p. 19) Growing up in the erratic care of a feckless single mother, “Kewauna seemed able to ignore the day-to-day indignities of life in poverty on the South Side and instead stay focused on her vision of a more successful future.” Kewauna tells Tough, “I always wanted to be one of those business ladies walking downtown with my briefcase, everybody saying, ‘Hi, Miss Lerma!’ “

Here, as throughout the book, Tough nimbly combines his own reporting with the findings of scientists. He describes, for example, the famous “marshmallow experiment” of the psychologist Walter Mischel, whose studies, starting in the late 1960s, found that children who mustered the self-control to resist eating a marshmallow right away in return for two marshmallows later on did better in school and were more successful as adults.
“What was most remarkable to me about Kewauna was that she was able to marshal her prodigious noncognitive capacity — call it grit, conscientiousness, resilience or the ability to delay gratification — all for a distant prize that was, for her, almost entirely theoretical,” Tough observes of his young subject, who gets into college and works hard once she’s there. “She didn’t actually know any business ladies with briefcases downtown; she didn’t even know any college graduates except her teachers. It was as if Kewauna were taking part in an extended, high-stakes version of Walter Mischel’s marshmallow experiment, except in this case, the choice on offer was that she could have one marshmallow now or she could work really hard for four years, constantly scrimping and saving, staying up all night, struggling, sacrificing — and then get, not two marshmallows, but some kind of elegant French pastry she’d only vaguely heard of, like a napoleon. And Kewauna, miraculously, opted for the napoleon, even though she’d never tasted one before and didn’t know anyone who had. She just had faith that it was going to be delicious.”

The full reference for the book under review, is:
Tough, Paul. How Children Succeed: Grit, Curiosity, and the Hidden Power of Character. Boston, MA: Houghton Mifflin Harcourt, 2012.