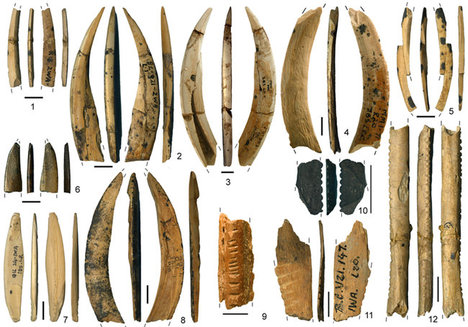 “CAVE RELICS; Clues to relatively modern behavior 44,000 years ago in Africa.” Source of caption and photo: online version of the NYT article quoted and cited below.

(p. D3) In the widening search for the origins of modern human evolution, genes and fossils converge on Africa about 200,000 years ago as the where and when of the first skulls and bones that are strikingly similar to ours. So this appears to be the beginning of anatomically modern Homo sapiens.

But evidence for the emergence of behaviorally modern humans is murkier — and controversial. Recent discoveries establish that the Homo sapiens groups who arrived in Europe some 45,000 years ago had already attained the self-awareness, creativity and technology of early modern people.
. . .
In their research, Dr. d’Errico and colleagues re-examined organic artifacts from Border Cave and their refined radiocarbon ages, concluding that “key elements of the San material culture” place “the emergence of modern hunter-gatherer adaptation, as we know it,” to more or less 44,000 years ago.
Previous discoveries revealed that other cave dwellers in southern Africa were experimenting with pigment use, body adornment, and advanced stone and bone tools more than 75,000 years ago, but that many of these artifacts seemed to disappear by 60,000 years ago. Dr. d’Errico’s group said this suggested that “modern behavior appeared in the past and was subsequently lost before becoming firmly established.”
. . .
In an earlier paper written with Dr. Stringer, Dr. d’Errico said that in his view, present evidence “does not support a gradualist scenario nor a revolution scenario, but a nonlinear process during which key cultural innovations emerge, are lost and re-emerge in different forms before being finally adopted.”
This process, he continued, “does not happen everywhere at the same time,” and the material culture at Border Cave is “not necessarily valid elsewhere.”