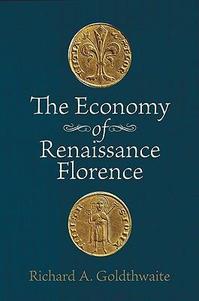 (p. 176) Chapters 4 and 5 deal with manufacturing, by far the main source of employment in the city. The Florentine textile industry had developed thanks to the Arno River, which provided water and power, and had become a market leader in Europe for high-quality products. Production was based, as everywhere in Europe, on a putting-out system–but strictly confined to the city. The author describes the organization and its changes over time, stressing, as for international banking, the flexibility of firms and their high turnover. Workers were organized in guilds, but the author stresses their nature as political associations rather than their economic role. Florentine guilds did not restrict the access to profession nor stifle innovation. Chapter 6 describes the banks catering for urban market–including local branches of international banks as well as smaller local firms, plus pawnbrokers, both Catholic and Jews. Local banks appeared thoroughly modern in their business and the resort to banking services was quite widespread. Artisans and workers were routinely paid with checks and had bank accounts. And the whole system worked well with almost no state intervention, at least until the late sixteenth century.
. . .
. . . , the author argues that Florentine society was very upwardly mobile, at least for the standard of the time and that the distribution of wealth by household according to the 1427 Catasto was fairly equal (although inequality increased in the next century).
(p. 177) As a whole, at the end of the book one has the impression of a really vibrant, flexible, and free-market city. The standard of living was undoubtedly high and not only for the wealthy, as witnessed by the art treasures of the city, but also for the working class. Literacy and numeracy was very common, and the majority of children attended a primary school.