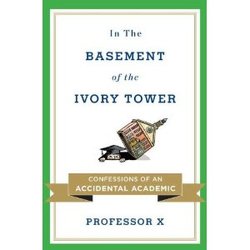 (p. 17) In June 2008, The Atlantic published an essay by an adjunct instructor of English, identified only as “Professor X,” whose job filled him with despair. Although the courses he taught were introductory, success was beyond many of his students, who, he wrote, were “in some cases barely literate.” X found giving F’s to be excruciating — “I am the man who has to lower the hammer,” he lamented — in part because he identified with his older students, who seemed to have lost their way in their careers much as X himself had.
. . .
. . . X’s function, in the ecology of the colleges where he teaches, is gatekeeper — most students who fail his classes will drop out — and he articulates the ethical challenge before him this way: “What grade does one give a college student who progresses from a 6th- to a 10th-grade level of achievement?” X gives F’s.
. . .
X and his wife got snookered in the housing bubble, and he wonders if the misery in his classroom might result from a similar education bubble. In 1940, there were 1.5 million college students in America; in 2006, there were 20.5 million. In X’s opinion, a glut of degrees has led to a spurious inflation of the credentials required for many jobs. Tuitions are rising, and two-thirds of college graduates now leave school with debt, owing on average about $24,000. A four-year degree is said to increase wages about $450,000 over the course of a lifetime, but X doubts the real value of degrees further down on the hierarchy of prestige. To him, the human cost is more conspicuous.
. . .
Professor X can be caustic about the euphemism and somewhat willed optimism that sometimes befog discussion of how to teach unprepared students. To relieve his and his students’ unhappiness, he proposes that employers stop demanding unnecessary degrees: a laudable suggestion, unlikely to be realized until the degree glut has dried up.

The full reference for the book under review, is:
X, Professor. In the Basement of the Ivory Tower: Confessions of an Accidental Academic. New York: Viking, 2011.

One thought on ““Education Bubble”: “A Spurious Inflation of the Credentials Required for Many Jobs””