“Eden Full, 20, tested her rotating solar panel in Kenya in 2010.” Source of caption and photo: online version of the NYT article quoted and cited below.

(p.1) EDEN FULL should be back at Princeton by now. She should be hustling to class, hitting the books, acing tests. In short, she should be climbing that old-school ladder toward a coveted spot among America’s future elite.

She isn’t doing any of that. Instead, Ms. Full, as bright and poised and ambitious as the next Ivy Leaguer, has done something extraordinary for a Princetonian: she has dropped out.
It wasn’t the exorbitant cost of college. (Princeton, all told, runs nearly $55,000 a year.) She says she simply received a better offer — and, perhaps, a shot at a better education.
Ms. Full, 20, is part of one of the most unusual experiments in higher education today. It rewards smart young people for not going to college and, instead, diving into the real world of science, technology and business.
The idea isn’t nuts. After all, Bill Gates and Steve Jobs dropped out, and they did O.K.
Of course, their kind of success is rare, degree or no degree. Mr. Gates and Mr. Jobs changed the world. Ms. Full wants to, as well, and she’s in a hurry. She has built a low-cost solar panel and is starting to test it in Africa.
“I was antsy to get out into the world and execute on my ideas,” she says.
At a time when the value of a college degree is being called into question, and when job prospects for many new graduates are grimmer than they’ve been in years, perhaps it’s no surprise to see a not-back-to-school movement spring up. What is surprising is where it’s springing up, and who’s behind it.
The push, which is luring a handful of select students away from the likes of Princeton, Harvard and M.I.T., is the brainchild of Peter A. Thiel, 44, a billionaire and freethinker with a remarkable record in Sil-(p. 7)icon Valley. Back in 1998, during the dot-com boom, Mr. Thiel gambled on a company that eventually became PayPal, the giant of online payments. More recently, he got in early on a little start-up called Facebook.
Since 2010, he has been bankrolling people under the age of 20 who want to find the next big thing — provided that they don’t look for it in a college classroom. His offer is this: $50,000 a year for two years, few questions asked. Just no college, unless a class is helpful for their Thiel projects.
. . .
Ms. Full is friends with another Thiel fellow, Laura Deming, 18. Ms. Deming is clearly brilliant. When she was 12, her family moved to San Francisco from New Zealand so she could work with Cynthia Kenyon, a molecular biologist who studies aging. When Ms. Deming was 14, the family moved again, this time to the Boston area, so she could study at M.I.T.
“Families of Olympic-caliber athletes make these kinds of sacrifices all the time,” says Tabitha Deming, Laura’s mother. “When we lived nearby in Boston, we were lucky to see her once a month. She never came home for weekends.”
John Deming, Laura’s father, graduated from Brandeis University at the age of 35 but says he disdains formal education at every level. His daughter was home-schooled.
“I can’t think of a worse environment than school if you want your kids to learn how to make decisions, manage risk and take responsibility for their choices,” Mr. Deming, an investor, wrote in an e-mail. “Rather than sending them to school, turn your kids loose on the world. Introduce them to the rigors of reality, the most important of which is earning your own way.” He added, “I detest American so-called ‘education.’ ”
His daughter’s quest to slow aging was spurred by her maternal grandmother, Bertie Deming, 85, who began having neuromuscular problems a decade ago. Laura, a first-year fellow, now spends her days combing medical journals, seeking a handful of researchers worth venture capital funding, which is a continuation of her earlier work.
“I’m looking for therapies that target aging damage and slow or reverse it,” she says. “I’ve already spent six years on this stuff. So far I’ve found only a few companies, two or three I’m really bullish on.” 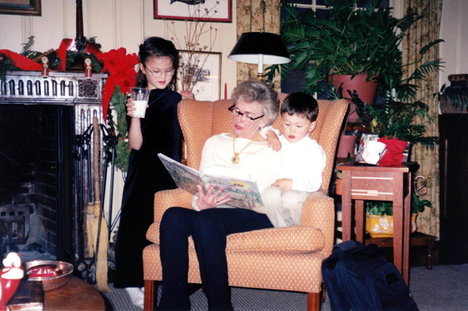 “Laura Deming, left, at age 6 with her grandmother, whose neuromuscular problems have now inspired Laura to work on anti-aging technology.” Source of caption and photo: online version of the NYT article quoted and cited above.