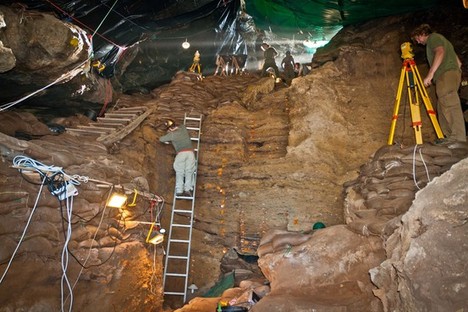 “Scientists at the Pinnacle Point excavation.” Source of caption and photo: online version of the WSJ article quoted and cited below.

(p. A3) A trove of sophisticated stone tools recently dug up from a South African cliff suggests early modern humans developed complex cognitive ability anywhere from 6,000 to 10,000 years earlier than many scientists believe.

In a study published in the journal Nature, researchers said they had unearthed a large number of small stone blades going back some 71,000 years. The heat-treated blades appear to have been designed for tipping spears or arrows that could be used for hunting game.
Crucially, the discovery indicates that these ancestors had the cognitive ability to manipulate complex tools. In addition, they were able to pass on their inventions to future generations. That, in turn, suggests the use of sophisticated language.
“What it’s showing us is that these people were like you and I,” said Curtis Marean, a paleoanthropologist at Arizona State University in Tempe, Ariz., co-author of the study, and leader of the South Africa project. “They were smart people.”
. . .
Dr. Marean and his colleagues unearthed the microliths at a site known as Pinnacle Point on the southern shore of South Africa. They began the dig in 2005.
Some 72,000 years ago, the earth was wrapped in a glacial chill that lasted about 12,000 years. The African interior was dry and many early modern humans would have moved to more hospitable locations, such as the southern coast. 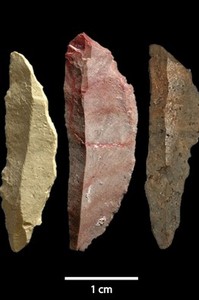 “Microlith blades.” Source of caption and photo: online version of the WSJ article quoted and cited above.