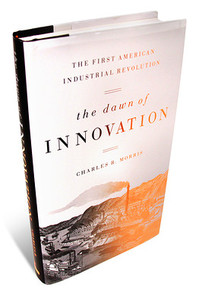 (p. A13) . . . the post-Civil War industrialization had an important and largely overlooked predecessor in the first decades of the 19th century, when, as Charles Morris writes in “The Dawn of Innovation,” “the American penchant for mechanized, large-scale production spread throughout industry, presaging the world’s first mass-consumption economy.” It is a story well worth telling, and Mr. Morris tells it well.
. . .
Whole industries sprang up as the country’s population boomed and spilled over into the Middle West. The rich agricultural lands there produced huge surpluses of grain and meat, especially pork. The city of Cincinnati–whose population grew to 160,000 in 1860, from 2,500 in 1810–became known as “Porkopolis” because of the number of hogs its slaughterhouses processed annually.
Mr. Morris does a particularly good job of explaining the crucial importance of synergy in economic development, how one development leads to another and to increased growth. The lard (or pig fat) from the slaughterhouses, he notes, served as the basis for the country’s first chemical industry. Lard had always been used for more than pie crust and frying. It was a principal ingredient in soap, which farm wives made themselves, a disagreeable and even dangerous task thanks to the lye used in the process.
But when lard processing was industrialized to make soap, it led to an array of byproducts such as glycerin, used in tanning and in pharmaceuticals. Stearine, another byproduct, made superior candles. Just in the decade from the mid-1840s to the mid-1850s, Cincinnati soap exports increased 20-fold, as did the export of other lard-based products. Procter & Gamble, founded in Cincinnati in 1837 by an Irish soap maker and an English candle maker who had married sisters, grew into a giant company as the fast-rising middle class sought gentility.
Mr. Morris goes into great detail on the development of interchangeable parts–the system of making the components of a manufactured product so nearly identical that they can be easily substituted and replaced.

The book under review, is:
Morris, Charles R. The Dawn of Innovation: The First American Industrial Revolution. Philadelphia, PA: PublicAffairs, 2012.