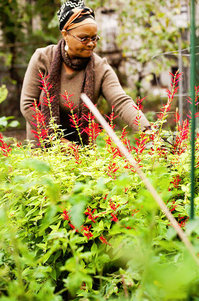 “. . . , Ena K. McPherson holds the key to three different community gardens.” Source of caption and photo: online version of the NYT article quoted and cited below.

(p. D1) There is some evidence, . . . , that the bulk of New Yorkers do not have an unlimited appetite for growing their own kale. Official counts of New York gardens are fragmentary. But John Ameroso, the Johnny Appleseed of the New York community garden movement, suspects that the number of present-day gardens — around 800 — may be half what it was in the mid-1980s.

In his long career as an urban extension agent for Cornell University, Mr. Ameroso, 67, kept a log with ratings of all the plots he visited. “I remember that there were a lot of gardens that were not in use or minimally used,” he said. “Into the later ’80s, a lot of these disappeared or were abandoned. Or maybe there was one person working them. If nothing was developed on them, they just got overgrown.”
The truth, Ms. Stone said, is that at any giv-(p. D6)en time, perhaps 10 percent of the city’s current stock of almost 600 registered GreenThumb gardens is growing mostly weeds. “In East New York, I can tell you that there are basically many gardens that are barely functioning now.”
. . .
An honest census would reveal that many gardens (perhaps most) depend on just one or two tireless souls, said Ena K. McPherson, a Brooklyn garden organizer. She would know because she’s one of them.
Ms. McPherson holds the keys to three community gardens in Bedford-Stuyvesant. (Ms. Stone appreciatively refers to these blocks as “the Greater Ena McPherson Zone.”) And she serves on the operations committee for the nonprofit Brooklyn Queens Land Trust, which holds the deeds to 32 garden plots.
“In an ideal situation, we would have gardens with everyone in the community participating,” Ms. McPherson said. “But in fact, a few die-hard people end up carrying the flag.”
. . .
The original gardens followed the city’s vacant lots, which by 1978 numbered 32,000. Mr. Ameroso, though trained in agronomy, pitched them as an instrument for community renewal. “How did you take back your block?” he said. “Put in a community garden and stop that dumping.”
Ms. Stone, who laughingly (and earnestly) describes herself as a socialist, continues to embrace something of this mission. “All the people who are marginal in society — and I’m not using that as a judgmental term, it’s children, senior citizens, people on disability, the 47 percent — these people are the main power people in the garden,” she said.
These days, Mr. Ameroso espouses more of what he calls an “urban agriculture” model: a food garden with a dedicated farmers’ market or a C.S.A. These amenities make stakeholders out of neighbors who may not like dirt under their nails and rural farmers who drive in every weekend.
“The urban-agriculture ones are flourishing,” he said. “There’s a lot of excitement. They’re active eight days a week.” But “community gardens, as such, where people come in to take care of their own boxes — those are not flourishing.”
It’s almost a cliché to point out that this new green model seems to have attracted tillers with a different skin tone. “Back then,” Mr. Ameroso said of his earlier career, “when we worked in Bronx or Bed-Stuy, it was mostly communities of color. Now when we talk about the urban agriculture stuff, it’s white people in their 30s.”
What explains this demographic shift?
“I have no idea,” he said. “I’m still baffled by it, and I’m involved in it!”