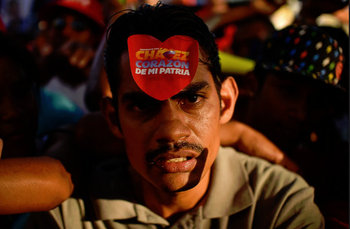 “A Chávez supporter. The president runs a well-oiled patronage system, a Tammany Hall-like operation but on a national scale. Government workers are frequently required to attend pro-Chávez rallies, and they come under pressure to vote for him.” Source of caption and photo: online version of the NYT article quoted and cited below.

After the story quoted below was published, Chávez (alas) was re-elected.

(p. A1) Many Venezuelans who are eager to send Mr. Chávez packing, fed up with the country’s lackluster economy and rampant crime, are nonetheless anxious that voting against the president could mean being fired from a government job, losing a government-built home or being cut off from social welfare benefits.

“I work for the government, and it scares me,” said Luisa Arismendi, 33, a schoolteacher who cheered on a recent morning as Mr. Chávez’s challenger, Henrique Capriles Radonski, drove by in this northeastern city, waving from the back of a pickup truck. Until this year, she always voted for Mr. Chávez, and she hesitated before giving her name, worried about what would happen if her supervisors found out she was switching sides. “If Chávez wins,” she said, “I could be fired.”
. . .
(p. A6) The fear has deep roots. Venezuelans bitterly recall how the names of millions of voters were made public after they signed a petition for an unsuccessful 2004 recall referendum to force Mr. Chávez out of office. Many government workers whose names were on the list lost their jobs.
Mr. Chávez runs a well-oiled patronage system, a Tammany Hall-like operation but on a national scale. Government workers are frequently required to attend pro-Chávez rallies, and they come under other pressures.
“They tell me that I have to vote for Chávez,” said Diodimar Salazar, 37, who works at a government-run day care center in a rural area southeast of Cumaná. “They always threaten you that you will get fired.”
Ms. Salazar said that her pro-Chávez co-workers insisted that the government would know how she voted. But experience has taught her otherwise. She simply casts her vote for the opposition and then tells her co-workers that she voted for Mr. Chávez.
“I’m not going to take the risk,” said Fabiana Osteicoechea, 22, a law student in Caracas who said she would vote for Mr. Chávez even though she was an enthusiastic supporter of Mr. Capriles. She said she was certain that Mr. Chávez would win and was afraid that the government career she hoped to have as a prosecutor could be blocked if she voted the wrong way.
“After the election, he’s going to have more power than now, lots more, and I think he will have a way of knowing who voted for whom,” she said. “I want to get a job with the government so, obviously I have to vote for Chávez.”

For the full story, see:
WILLIAM NEUMAN. “Fear of Losing Benefits Affects Venezuela Vote.” The New York Times (Sat., October 6, 2012): A1 & A6.
(Note: ellipsis added.)
(Note: the online version of the article has the date October 5, 2012, and has the title “Fears Persist Among Venezuelan Voters Ahead of Election.”)