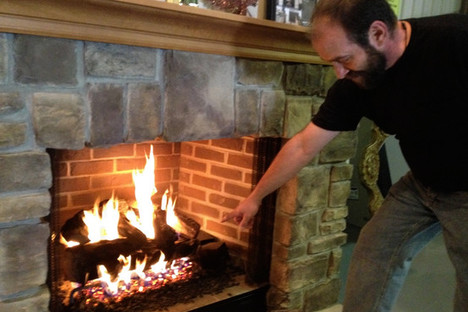 “Mike Taylor displays a gas-log set at Acme Stove in Rockville, Md.” Source of caption and photo: online version of the WSJ article quoted and cited below.

(p. A8) Rett Rasmussen sells gas-log sets, which use a “dancing flame” design that his father invented more than 50 years ago to replicate a cozy wood fire.

They are just for decoration, he says. But as the season approaches for families to gather around the hearth–real or fake–Mr. Rasmussen and other makers of hearth products are having a flare-up with the Department of Energy. The federal agency says it has the authority to regulate the log sets as heating equipment, though it isn’t proposing any changes now.
The issue “just hit us out of left field,” said Mr. Rasmussen. His company of about 50 employees–Rasmussen Iron Works Inc. of Whittier, Calif.–has spent at least $20,000 to fight any regulatory change, he says.
. . .
Judge A. Raymond Randolph expressed sympathy for the industry, saying that an object is not a heater simply “because it makes the air around it warm.”
“I don’t understand that as a matter of pure English,” said Judge Randolph, who was appointed by President George H.W. Bush. He added: “That’s like saying a match is designed to furnish warm air. It’s designed to furnish a flame.”
H. Thomas Byron, a Justice Department lawyer, said it was “rhetorical hyperbole” to suggest Washington wanted to regulate everything that’s warm.   . . .
Mr. Rasmussen, who says the family business has struggled in the weak economy, monitors the case closely. “We’re alive and kicking, but it’s not what it used to be, and when you have to fight your government, it’s hard to see where it’s going to get back anywhere near where it has been,” he said.

For the full story, see:
RYAN TRACY. “Hearth Makers Get Hot Over Regulations.” The Wall Street Journal (Tues., October 23, 2012): A8.
(Note: ellipses and bracketed date added.)
(Note: the online version of the article was dated October 22, 2012.)
(Note: in the third paragraph “he says” appeared in the online, but not the print, version.)