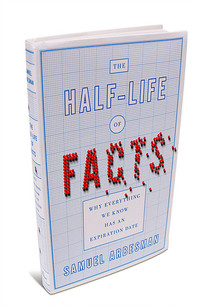 (p. A17) Knowledge, then, is less a canon than a consensus in a state of constant disruption. Part of the disruption has to do with error and its correction, but another part with simple newness–outright discoveries or new modes of classification and analysis, often enabled by technology.
. . .
In some cases, the facts themselves are variable.  . . .
. . .
More commonly, however, changes in scientific facts reflect the way that science is done. Mr. Arbesman describes the “Decline Effect”–the tendency of an original scientific publication to present results that seem far more compelling than those of later studies. Such a tendency has been documented in the medical literature over the past decade by John Ioannidis, a researcher at Stanford, in areas as diverse as HIV therapy, angioplasty and stroke treatment. The cause of the decline may well be a potent combination of random chance (generating an excessively impressive result) and publication bias (leading positive results to get preferentially published).
If shaky claims enter the realm of science too quickly, firmer ones often meet resistance. As Mr. Arbesman notes, scientists struggle to let go of long-held beliefs, something that Daniel Kahneman has described as “theory-induced blindness.” Had the Austrian medical community in the 1840s accepted the controversial conclusions of Dr. Ignaz Semmelweis that physicians were responsible for the spread of childbed fever–and heeded his hand-washing recommendations–a devastating outbreak of the disease might have been averted.
Science, Mr. Arbesman observes, is a “terribly human endeavor.” Knowledge grows but carries with it uncertainty and error; today’s scientific doctrine may become tomorrow’s cautionary tale. What is to be done? The right response, according to Mr. Arbesman, is to embrace change rather than fight it. “Far better than learning facts is learning how to adapt to changing facts,” he says. “Stop memorizing things . . . memories can be outsourced to the cloud.” In other words: In a world of information flux, it isn’t what you know that counts–it is how efficiently you can refresh.

For the full review, see:
DAVID A. SHAYWITZ. “BOOKSHELF; The Scientific Blind Spot.” The Wall Street Journal (Mon., November 19, 2012): A17.
(Note: ellipses added, except for the one internal to the last paragraph, which was in the original.)
(Note: the online version of the article was dated November 18, 2012.)

The book under review, is:
Arbesman, Samuel. The Half-Life of Facts: Why Everything We Know Has an Expiration Date. New York: Current, 2012.