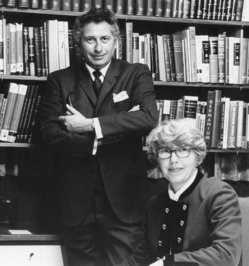 (p. A23) Stanford R. Ovshinsky, an iconoclastic, largely self-taught and commercially successful scientist who invented the nickel-metal hydride battery and contributed to the development of a host of devices, including solar energy panels, flat-panel displays and rewritable compact discs, died on Wednesday [October 17, 2012] at his home in Bloomfield Hills, Mich. He was 89.
. . .
His ideas drew only scorn and skepticism at first. He was an unknown inventor with unconventional ideas, a man without a college education who made his living designing automation equipment for the automobile industry in Detroit, far from the hotbeds of electronics research like Silicon Valley and Boston.
But Mr. Ovshinsky prevailed. Industry eventually credited him for the principle that small quantities or thin films of amorphous materials exposed to a charge can instantly reorganize their structures into semicrystalline forms capable of carrying significant current.
. . .
In 1960, he and his second wife, the former Iris L. Miroy, founded Energy Conversion Laboratories in Rochester Hills, Mich., to develop practical products from the discovery. It was renamed Energy Conversion Devices four years later.
Energy Conversion Devices and its subsidiaries, spinoff companies and licensees began translating Mr. Ovshinsky’s insights into mechanical, electronic and energy devices, among them solar-powered calculators. His nickel-metal battery is used to power hybrid cars and portable electronics, among other things.
He holds patents relating to rewritable optical discs, flat-panel displays and electronic-memory technology. His thin-film solar cells are produced in sheets “by the mile,” as he once put it.
. . .
“His incredible curiosity and unbelievable ability to learn sets him apart,” Hellmut T. Fritzsche, a longtime friend and consultant, said in an interview in 2005.

For the full obituary, see:
BARNABY J. FEDER. “Stanford R. Ovshinsky Dies at 89, a Self-Taught Maverick in Electronics.” The New York Times (Fri., October 19, 2012): A23.
(Note: ellipses and bracketed date added.)
(Note: the online version of the article was dated October 18, 2012.)
(Note: in the first sentence of the print version, “hybrid” was used instead of the correct “hydride.”)