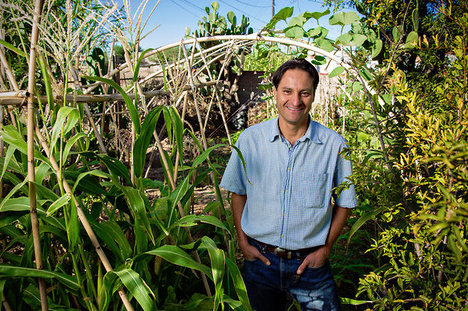 “In a straightforward sense, Mr. García, 44, is a Mexican ecologist. More broadly, though, he is a self-appointed emissary from the land once known as Pimería Alta, an interpreter of its culture, plants and people.” Source of caption and photo: online version of the NYT article quoted and cited below.

(p. D6) Over the weekend, Mr. García would be driving back to his family seat in the mission town of Magdalena de Kino, Mexico. In a way, his personal mission is to recreate the orchards he knew there. He has started with dozens of seedlings in the backyard of the small ranch house that he shares with his girlfriend, Dena Cowan, a Spanish-language interpreter and videographer. (The couple recently produced a documentary, in Spanish and English, about the Kino Heritage Fruit Trees Project called “Tasting History.”)

Yet he remembered the orchards with something other than simple nostalgia.
As a child, he packed boxes of fruit to load onto his uncle’s truck. “My father had this farm that he was renting, probably two acres,” Mr. García recalled. By necessity, “the only things we bought from the store were salt, sugar, coffee and kerosene,” he said. “Everything else we produced.”
“Our mother, she made our underwear out of the wheat sacks,” he continued. “My father used to make these homemade shoes for my brothers: leather, with used tires on the sole. They would hide them in the river on the way to school and then go to school barefooted.” Better that, he recalled, than let classmates see their privation.
By the time Mr. García reached junior high, his older sister has become a teacher and the family’s lot had improved. They installed indoor plumbing, for a start. There was nothing trendy about what he ironically calls their “sustainable” years. “I got the tail end,” Mr. García said. “But I got enough to realize how hard work it is. I learned enough to realize I wanted to get an education and get out of that life.”