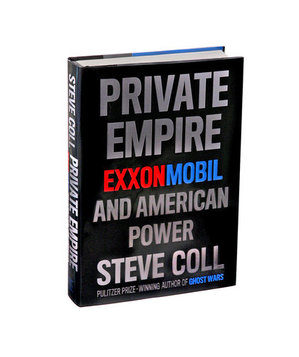 Source of book image: online version of the NYT review quoted and cited way below.

(p. C12) From Indiana to Indonesia, ExxonMobil is the multinational corporation that people love to hate. John D. Rockefeller’s creation is famed and feared for its discipline, its disregard for public opinion and its ability, year after year, to pump out the largest profits of any corporation on the planet. In “Private Empire,” Steve Coll provides a rare exploration of what makes a modern corporate giant tick and shows why the world looks different to the executives in the “God Pod” at ExxonMobil’s Texas headquarters than it might to you or me.

From another review of the same book:

“Private Empire” is meticulous, multi-angled and valuable. It is also, perhaps surprisingly, despite all the dark facts I have dumped above, impartial. Mr. Coll and his phlegmatic research assistants have interviewed more than 400 people, including Exxon Mobil’s longtime chief executive Lee R. Raymond, a legendarily hard character.

It’s among this book’s achievements that it attempts to view a dysfunctional energy world, as often as not, through Exxon Mobil’s eyes. The company is portrayed here, some egregious missteps aside, as possessing an honorable if rigid corporate culture that seeks to supply a product (unlike tobacco companies, to which it is often compared) that a functioning society actually must have.