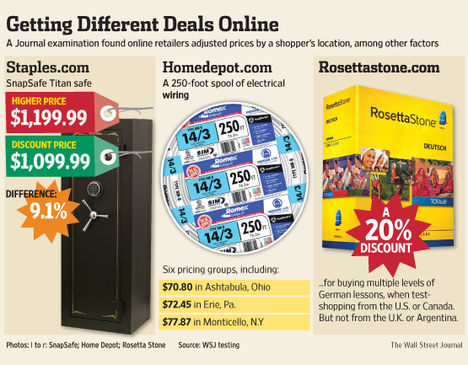 (p. A10) This year, researchers in Spain studied more than 200 online retailers and found a handful of examples of price differences–including at Staples within Massachusetts–that appeared to be based on location and other factors. Those findings suggest that Staples’ price adjustments have been present at least since this summer.

It is difficult for online shoppers to know why, or even if, they are being offered different deals from other people. Many sites switch prices at lightning speed in response to competitors’ offerings and other factors, a practice known as “dynamic pricing.” Other sites test different prices but do so without regard to the buyer’s characteristics.
To find differences that weren’t purely the result of dynamic pricing or randomized tests, the Journal conducted preliminary scans by simulating visits from different computers to a variety of e-commerce sites. If a website showed different prices or offers, the Journal then analyzed the site’s computer code and conducted follow-up testing.
The Journal’s tests, which were conducted in phases between August and December, indicated that some big-name retailers are experimenting with offering different prices and products to different users.
Some sites, for example, gave discounts based on whether or not a person was using a mobile device. A person searching for hotels from the Web browser of an iPhone or Android phone on travel sites Orbitz and CheapTickets would see discounts of as much as 50% off the list price, Orbitz said.
. . .
At home-improvement site Lowe’s Cos., . . . prices depend on location. For example, a refrigerator in the Journal’s tests cost $449 in Chicago, Los Angeles and Ashburn, Va., but $499 in seven other test cities. Lowe’s said online shoppers receive the lower of the online store price or the price at their local Lowe’s store as indicated by their ZIP Code.
Home Depot’s website offered price variations that appeared to be based on the nearest brick-and-mortar store as well. A 250-foot spool of electrical wiring fell into six pricing groups, including $70.80 in Ashtabula, Ohio; $72.45 in Erie, Pa.; $75.98 in Olean, N.Y and $77.87 in Monticello, N.Y.
. . .
The differences found on the Staples website presented a complex pricing scheme. The Journal simulated visits to Staples.com from all of the more than 42,000 U.S. ZIP Codes, testing the price of a Swingline stapler 20 times in each. In addition, the Journal tested more than 1,000 different products in 10 selected ZIP Codes, 10 times in each location.
The Journal saw as many as three different prices for individual items. How frequently a simulated visitor saw low and high prices appeared to be tied to the person’s ZIP Code. Testing suggested that Staples tries to deduce people’s ZIP Codes by looking at their computer’s IP address. This can be accurate, but isn’t foolproof.
In the Journal’s tests, ZIP Codes whose center was farther than 20 miles from a Staples competitor saw higher prices 67% of the time. By contrast, ZIP Codes within 20 miles of a rival saw the high price least often, only 12% of the time.