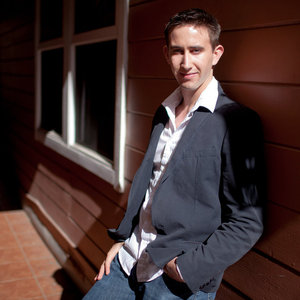 “Dale J. Stephens, who founded UnCollege.” Source of caption and photo: online version of the WSJ article quoted and cited below.

Two years ago, Mr. Goering was a sophomore at the University of Kansas, studying computer science and philosophy and feeling frustrated in crowded lecture halls where the professors did not even know his name.
“I wanted to make Web experiences,” said Mr. Goering, now 22, and create “tools that make the lives of others better.”
So in the spring of 2010, Mr. Goering took the same leap as Mr. Zuckerberg: he dropped out of college and moved to San Francisco to make his mark. He got a job as a software engineer at a social-software company, Livefyre, run by a college dropout, where the chief technology officer at the time and a lead engineer were also dropouts. None were sheepish about their lack of a diploma. Rather, they were proud of their real-life lessons on the job.
“Education isn’t a four-year program,” Mr. Goering said. “It’s a mind-set.”
The idea that a college diploma is an all-but-mandatory ticket to a successful career is showing fissures. Feeling squeezed by a sagging job market and mounting student debt, a groundswell of university-age heretics are pledging allegiance to new groups like UnCollege, dedicated (p. 16) to “hacking” higher education. Inspired by billionaire role models, and empowered by online college courses, they consider themselves a D.I.Y. vanguard, committed to changing the perception of dropping out from a personal failure to a sensible option, at least for a certain breed of risk-embracing maverick.
Risky? Perhaps. But it worked for the founders of Twitter, Tumblr and a little company known as Apple.
When Mr. Goering was wrestling with his decision, he woke up every morning to a ringtone mash-up that blended electronic tones with snippets of Steve Jobs’s 2005 commencement address at Stanford University, in which he advised, “love what you do,” “don’t settle.” Mr. Goering took that as a sign.
“It’s inspiring that his dropping out basically had no effect, positive or negative, on the work and company and values he could create,” he said of the late Apple co-founder.
In that oft-quoted address, Mr. Jobs called his decision to drop out of Reed College “one of the best decisions I ever made.” Mr. Jobs’s “think different” approach to education (backpacking through India, dining with Hare Krishnas) is portrayed in countless hagiographies as evidence of his iconoclastic genius.
. . .
. . . Dale J. Stephens, [is] the founder of a group called UnCollege that champions “more meaningful” alternatives to college. . . .
. . .
UnCollege advocates a D.I.Y. approach to higher education and spreads the message through informational “hackademic camps.” “Hacking,” in the group’s parlance, can involve any manner of self-directed learning: travel, volunteer work, organizing collaborative learning groups with friends. Students who want to avoid $200,000 in student-loan debt might consider enrolling in a technology boot camp, where you can learn to write code in 8 to 10 weeks for about $10,000, Mr. Stephens said.
THEY can also nourish their minds from a growing menu of Internet classrooms, including the massive open online courses, or MOOCs, which stream classes from elite universities like Princeton. This guerrilla approach hits home with young people who came of age seeking out valuable content free on Napster and BitTorrent.
Mr. Stephens, a dropout from Hendrix College in Arkansas (he later earned a Thiel Fellowship), started UnCollege less than two years ago, and already its Web site attracts 20,000 unique visitors a month. “I get on scale of 10 to 15 e-mails a day from people who say something along lines of, ‘I thought I was the only one out there who thought about education like this, I don’t feel crazy anymore,’ ” he said.
. . .
The goal is not to foment for a mass exodus from the ivy halls, Mr. Stephens said, but to open people’s minds to a different set of opportunities.