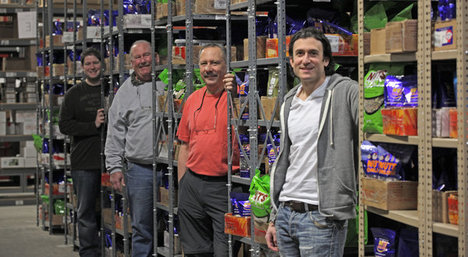 “Jeffrey Braverman, right, stepped away from Wall Street to join his father, uncle and cousin in the family’s New Jersey nut business.” Source of caption and photo: online version of the NYT article quoted and cited below.

(p. B8) Ten years ago, Jeffrey Braverman was living the dream of many business school graduates. With a freshly minted bachelor’s degree in economics, he landed a job in 2002 at the Blackstone Group, a Wall Street firm specializing in private equity and investment banking.
Less than a year later, however, Mr. Braverman stepped away from Wall Street and returned to his family’s New Jersey nut business, the Newark Nut Company. It struck some as an odd choice: the family-owned company, which had been started by Mr. Braverman’s grandfather, Sol Braverman (known as Poppy), and had once employed 30 people, was down to two employees and two family members, Mr. Braverman’s father and his uncle.
Located in an indoor mall in a desolate part of Newark, the nut shop’s retail sales were fading and its wholesale business was, at best, stagnant. But Mr. Braverman harbored entrepreneurial ambitions.
At the beginning, he agreed to work with his father and uncle for a salary tied directly to how much new business he attracted. He focused on Internet sales and before long, they began to dwarf the existing business.
Now based in Cranford, N.J., the company has grown to more than 80 employees with more than $20 million in revenue, 95 percent of it online. The following is a condensed version of a recent conversation.
Q. Who leaves investment banking to work at a struggling family nut company?
A. Only someone nuts, right? My dad and my uncle both thought I was crazy. I was making more than they were at the time.
Q. Then why?
A. Have you ever read the book “Monkey Business”? It’s a fairly accurate profile of what it’s like to be in investment banking, at least at a junior level. You know, there’s this economic concept called deadweight loss, and I think a lot of investment banking is like that: it doesn’t really add anything to the world, to the economy. I just wanted to do more.
Q. I assume your father and uncle made you take a pay cut.
A. The one thing I did was, I didn’t want to take anything away from them. I structured it so that my compensation was 100 percent based on incremental profit improvement. So from their perspective, there wasn’t very much risk. I also got a small piece of the business. But at the time the business was worth nothing, book value. No one would have bought it.
Q. Did you have any experience in Internet sales?
A. In 1999, I was a freshman in college and I started our Web site, Nutsonline.com. I spent my second semester of freshman year working on that thing four or five hours a day. It kind of just trickled along. In 1999, very few people were buying from Amazon, so they certainly weren’t going to buy from Nutsonline. In 2000, I remember I set a goal: I wanted to do 10 orders a day. 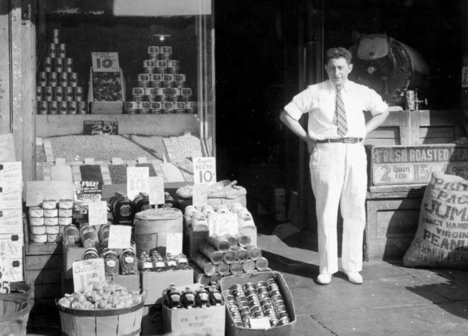 “Sol Braverman, Jeffrey’s grandfather, in the early 1930s.” Source of caption and photo: online version of the NYT article quoted and cited above.