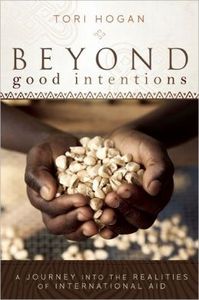 (p. C8) In 2002, Tori Hogan was a 20-year-old intern for the international nonprofit Save the Children, helping write a report on the effect of humanitarian aid on children. In a dusty refugee-camp high school in Kenya a teenage student told her: “A lot of aid workers come and go, but nothing changes. If the aid projects were effective, we wouldn’t still be living like this after all these years.” That remark ended Tori Hogan’s “dreams of ‘saving Africa,’ ” she writes in “Beyond Good Intentions,” a book that bypasses sweeping condemnations of the aid industry to reach sometimes less satisfying zones of nuance.
. . .
The most savage writing on this topic comes from authors who have devoted chunks of their lives to conflict zones. In “The Crisis Caravan” (2010), Dutch journalist Linda Polman quotes, to devastating effect, Sierra Leone rebels who claim that they launched mass amputations in 1999 to compete with Congo and Kosovo for international attention and development aid. Michael Maren, the author of “Road to Hell” (2010), lost his child to the aid effort in Somalia.

The book under review is:
Hogan, Tori. Beyond Good Intentions: A Journey into the Realities of International Aid. pb (appears there was no hb edition) ed. Berkeley, CA: Seal Press, 2012.
(Note: ellipsis added.)

The Maren book mentioned above, is:
Maren, Michael. The Road to Hell: The Ravaging Effects of Foreign Aid and International Charity. New York: The Free Press, 1997.